The Fleet that Never Was: Some early photos

One project I have started with my friend Doruk is a campaign for the naval aspects of the First Balkan War, and more especially the War that Never Wars, the expected 1914 naval war between the Ottoman Empire and Greece. Both sides had engaged in an arms race, ordering dreadnoughts in a race to gain operational dominance in such a war.  The dispute was over the heavility Greek populated, but crucial for Ottoman strategic security Western Aegean Islands. The Greeks had taken them (or liberated) in 1912, but the peace treaties that ended the Balkan Wars did not resolve the issues of sovereignty. The war never happened as in 1914 World War 1 started. The British impounded the two Ottoman dreadnoughts (which became the HMS Erin and HMS Agincourt) and the French and Germans stopped working on the Greek orders (a Breatagne class ship, and the unique Salamis, which looked like Koning Class).

What would had happened if these Aegean behemoths had actually gone to sea? This is what we wish to find out.We are using the Operational system of Great War at Sea to generate battles, and will fight the Tactical engangmenets using Fleet Action Imminent.

Read more »
Posted by Konstantinos Travlos at 4:36 AM 2 comments:

Email ThisBlogThis!Share to TwitterShare to FacebookShare to Pinterest
Labels: Age of Naval Steam

Since a lot of people liked my Kennesaw Mountain Park post, here are pictures and a video from my visit to Lookout Mountain and Chickamauga National Battlefield park from 2014. I am going to make this a regular series, to give a chance to many of us to see places we might never see up close. This is not as organised as my Kennesaw one.

Over last week I was in Atlanta attending the ISA convention. It was a good convention. I decided to take time to visit and explore Kennesaw Mountain National Battlefield Park, which is rather close to the city. The National Park commemorates the Battle of Kennesaw , fought in 1864 as part of the campaign that led to the fall of Atlanta.

I took a lot of pictures, but also prepared a video of my excursion. Here is the video (hosted on Youtube)

And here are the photos

Read more »
Posted by Konstantinos Travlos at 6:02 AM 2 comments:

Another friend of mine, Tasos, sent me a number of pictures from Warhammer 40k wargames in the area of Markopoulo (and the eastern suburbs of Athens) which is rural Attica around the International Airport. Enjoy 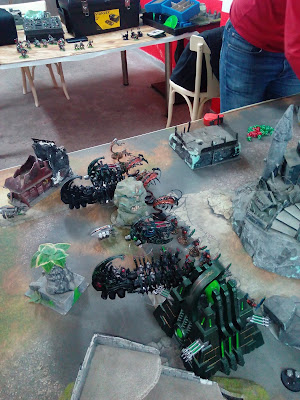 Read more »
Posted by Konstantinos Travlos at 10:52 AM 1 comment:

Last Century of the Ottomans: Kurudere

Last weekend Onur and Emir came over for the first game in our Last Century of the Ottomans Bloody Big Battles Campaign. It was decided that I shall command the Ottoman attack, and they would share the Russian defense.

We even did a video!

Historically the Ottomans divided their forces and executed a Night March to flank the Russians at Karayal. A good idea on paper it failed due to the terrible leadership and quality of the Ottoman troops. My rule of thumb when leading bad quality armies is concentration. Thus I opted for a daytime approach and a condensed battle array.  On my right flank I placed the powerful 2nd division with one of its batteries. Its goal was to sweep over the Karayal mountain and pincer any Russian units between the mountain and the small stream together with the 1st Division under Hassan Pasha. The Hssan Reserve Force would keep any Russian troop deployed at Kurudere and Poldervan from helping the isolated troops. Once those were destroyed I would roll the flank and either win a draw or victory, with the chances of the draw higher.

Read more »
Posted by Konstantinos Travlos at 4:15 AM 9 comments:

I decided to once more do brief reviews of books I have read over the period since my last Book Review (which can be found at Book Reviews: 19th Century Warfare I)

Some of the books I read I read in print, and I believe that for those I will do a video review, since many of them are illustrated. Kindle books and non-illustrated books I will review here.

Read more »
Posted by Konstantinos Travlos at 12:52 AM 2 comments: