Good Day friends
Here is the usual bi-weekly update on my gaming activities. This time I got stuff on:
SAGA
Kiss me Hardy
Pre-Dreadnoughts
28MM Napoleonics

I only gamed once in these previous two weeks due to research related work I needed to catch up on. I went over to Galactic Comics and Games in Statesboro, GA for a game of Saga with Keith's Irish and a game of demonstration game for Kiss me Hardy.I was pumped up with energy but the game day did not open up.

We set our forces up for SAGA playing Sacred Ground (4 points each). I build a smaller warband of 12 Hearthguards and 12 Levy, while Keith used his usual Irish build of 1 unit of 6 Hearthguards, 1 of Warriors (or hounds), 1 of Levy with slings and the two bodygaurds. 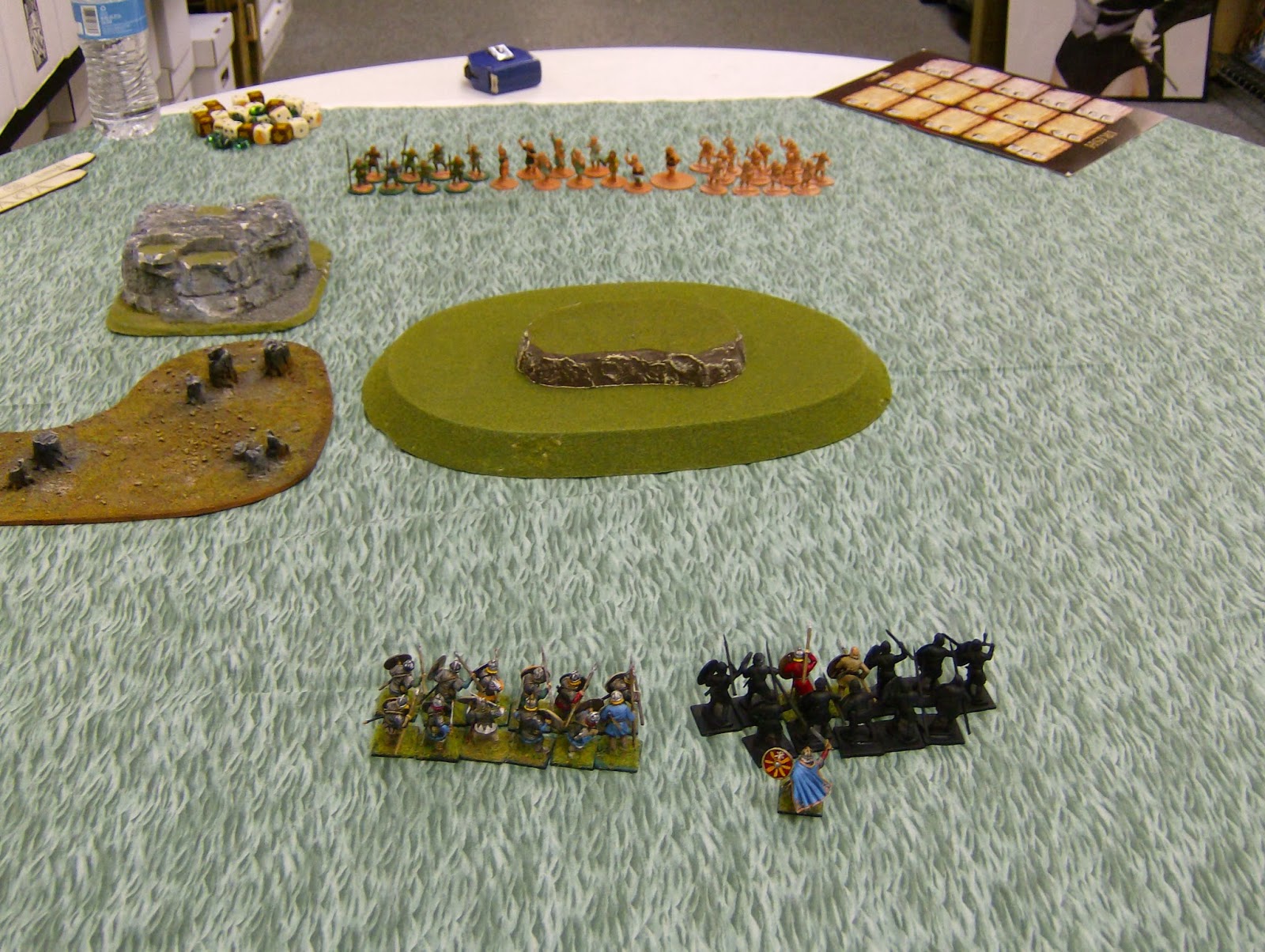 We started in two shield walls and moved forward towards the hills. Then to my HORROR I noticed that my Hearthguard was within S distance of the only copes of woods! I had thought I was safe....I was wrong. 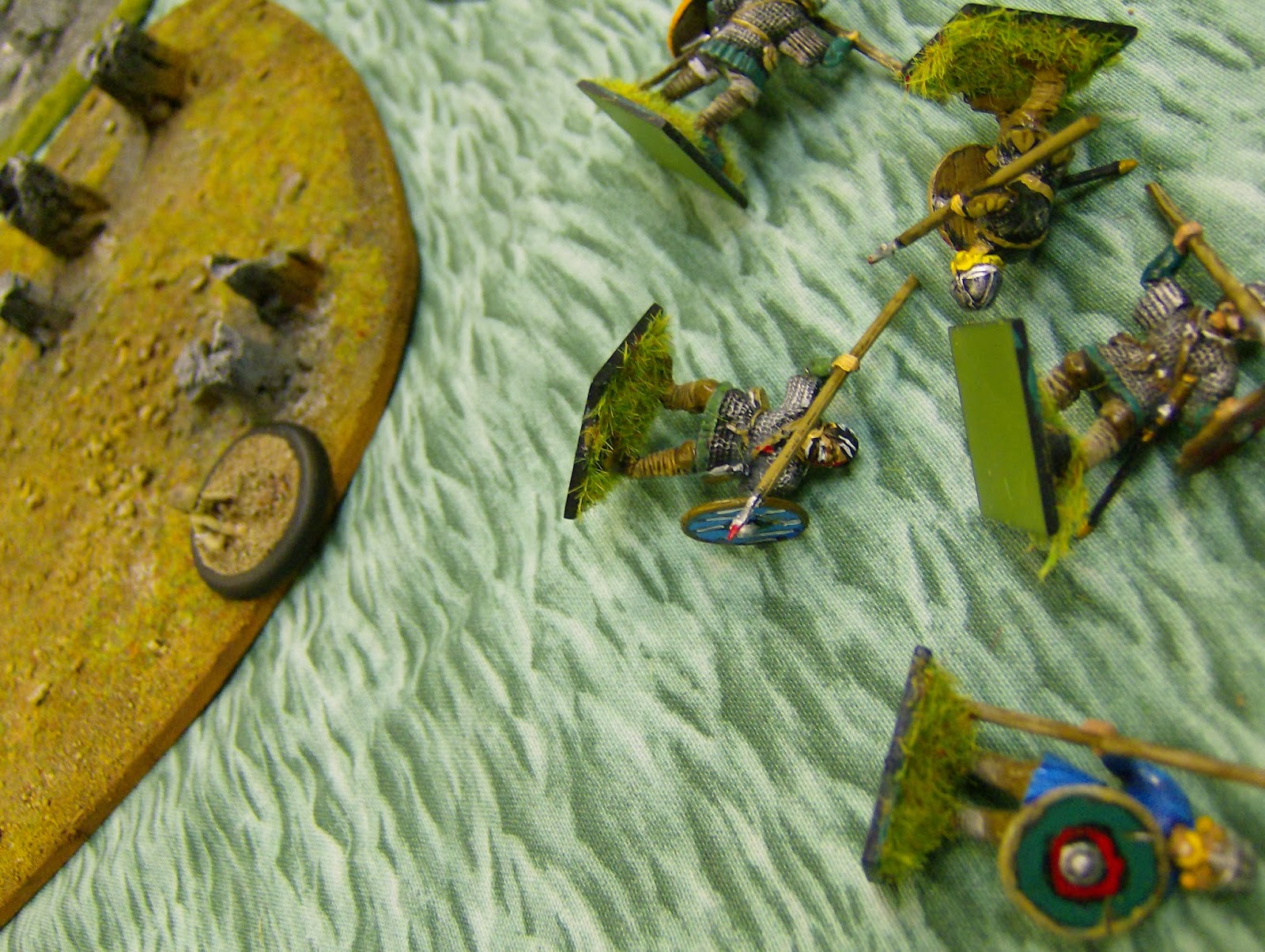 Of course Keith rolled good SAGA dice and that miserable rabble of urchins and old men started pelting my Hearthguard with rocks and arrows. Killing 5 of them!!!!! It only got worse after that, as the slingers decimated my Levy and a suicide charge by my remaining Hearthguard was butchered. We called the game at the start of turn three.

You can see more pictures at the Galactic Comics and Games Facebook page.

After that Keith and Adam (another Saga player) decided to sit down and play Kiss me Hard. The scenario was a fictional Mediterranean battle in which 3 French Ships of the line were running a Russo-British blockade of 2 Ships of SOL a piece. Keith played the British while Adam chose the Russians.

The opposing forces were

You can see that the initial disposition of the terrain determined the French strategy which was to charge the Russian squadron and escape through it to freedom, before the British arrived. 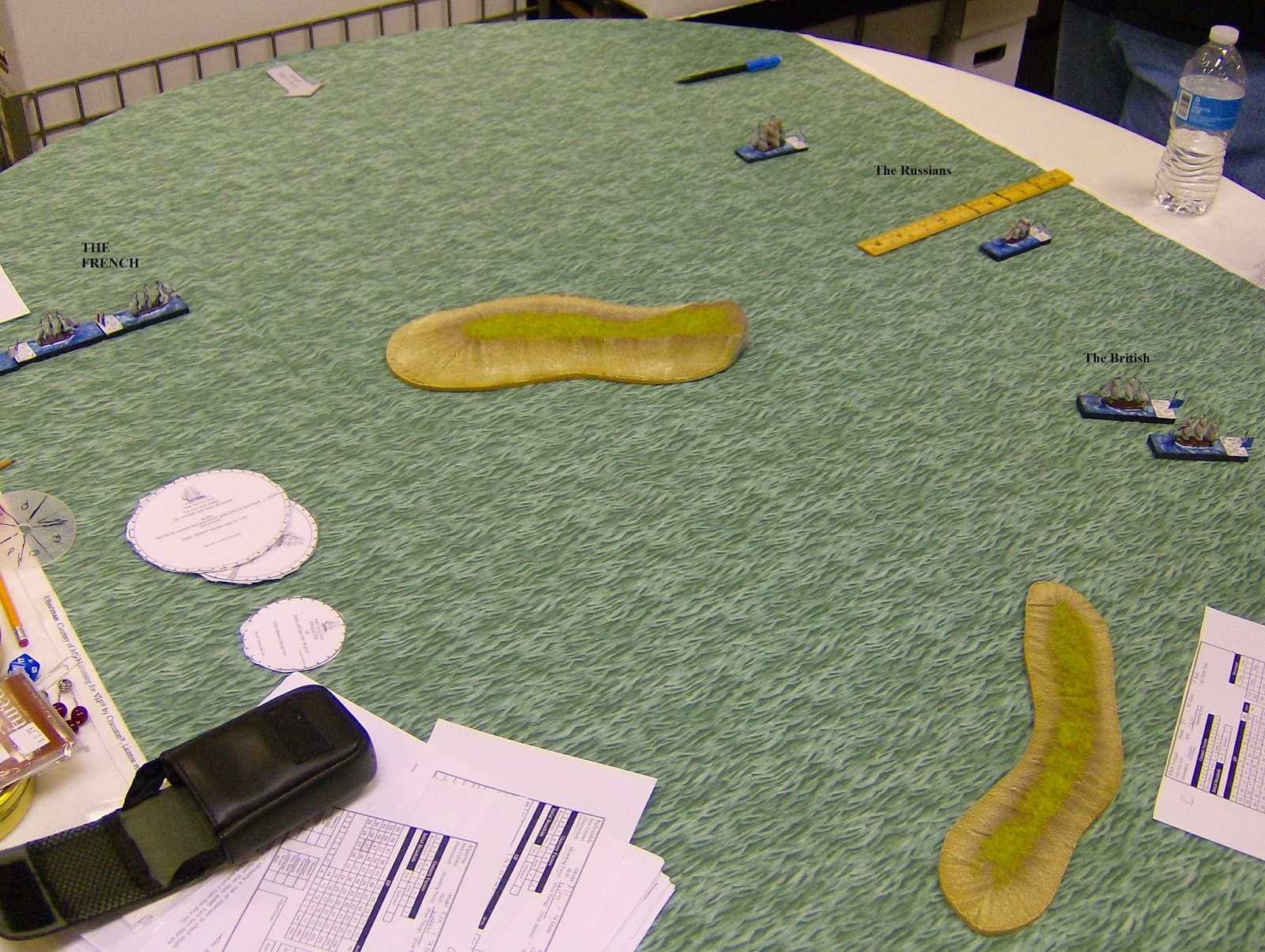 The Wind initially heavily favored the French. The Pavel, Tonnant and Anapa all lost their fore-masts at some point due to being in the Dead Zone, and the Pavel and Anapa suffered damage for being "taken aback" by the wind multiple times. This also meant that for the first 4 turns the British ships made very little ground. 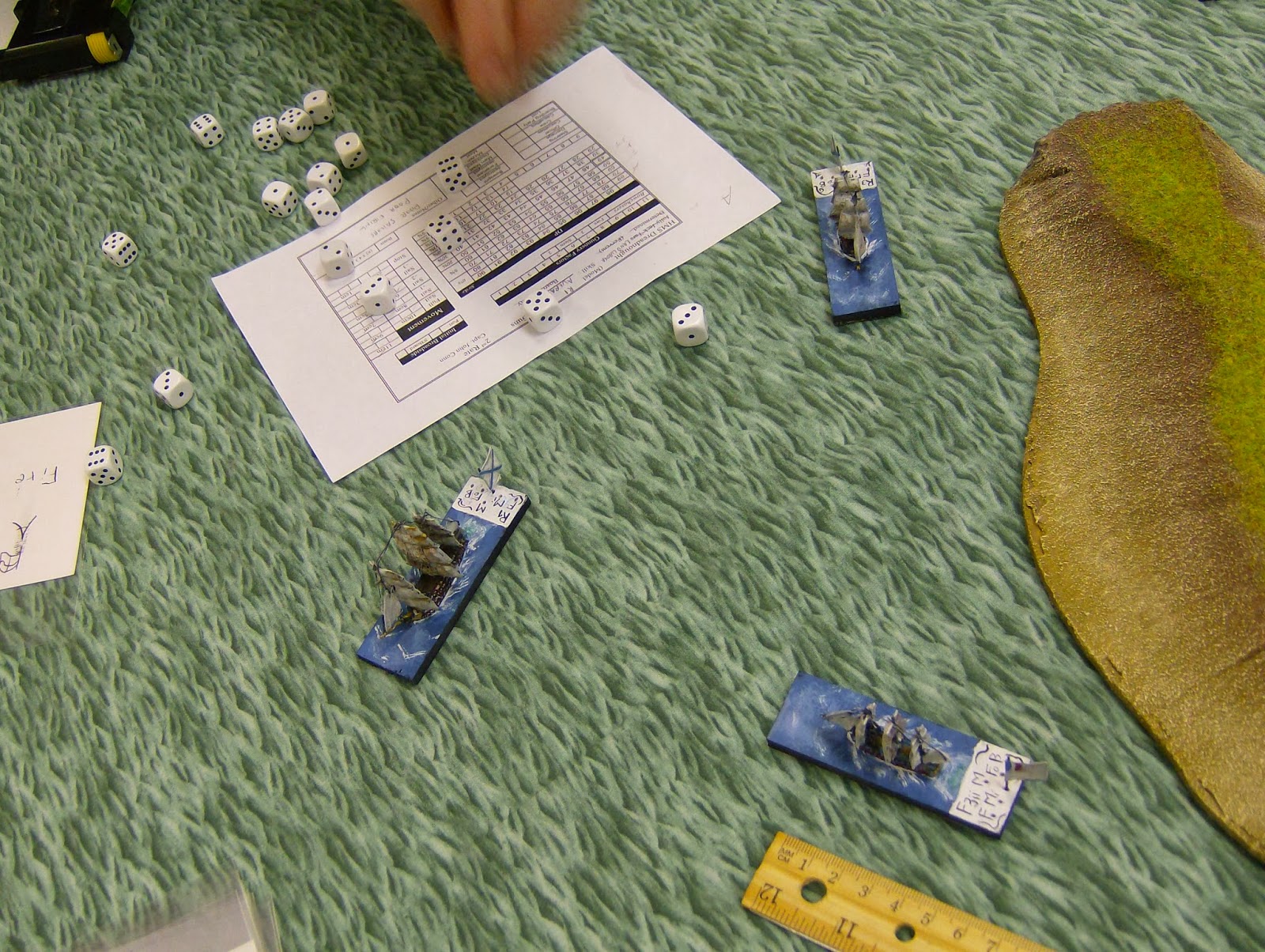 That said the Pavel was able to show its broadsides to the French ships and blasted a rake the Algeciras causing considerable damage. The Redoutable in turn raked the Pavel. Indeed in the melee between the Russians and French multiple ships suffered multiple rakes. However the crews of both fleets, fortified I am sure by cognac and vodka refused to surrender. 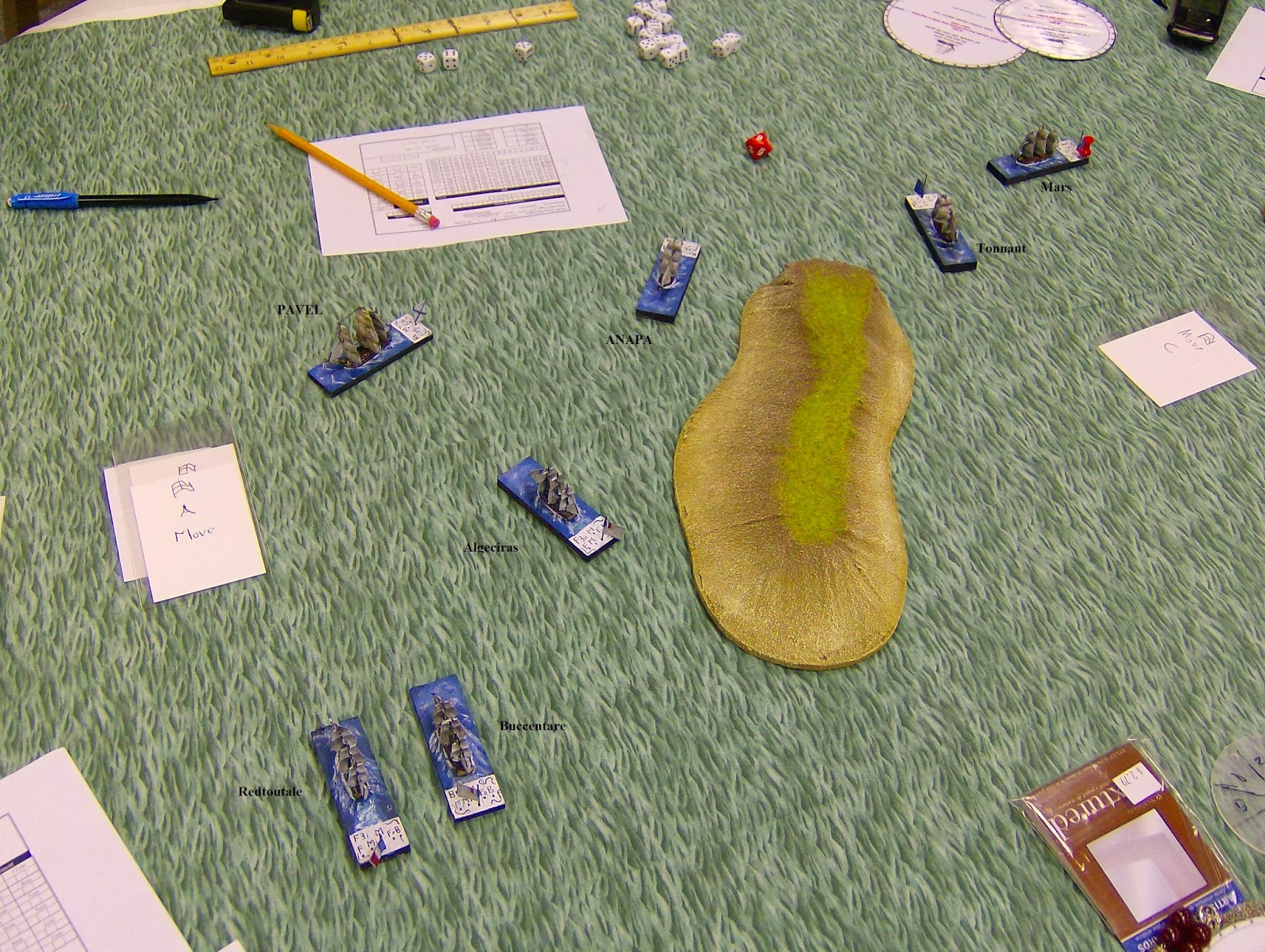 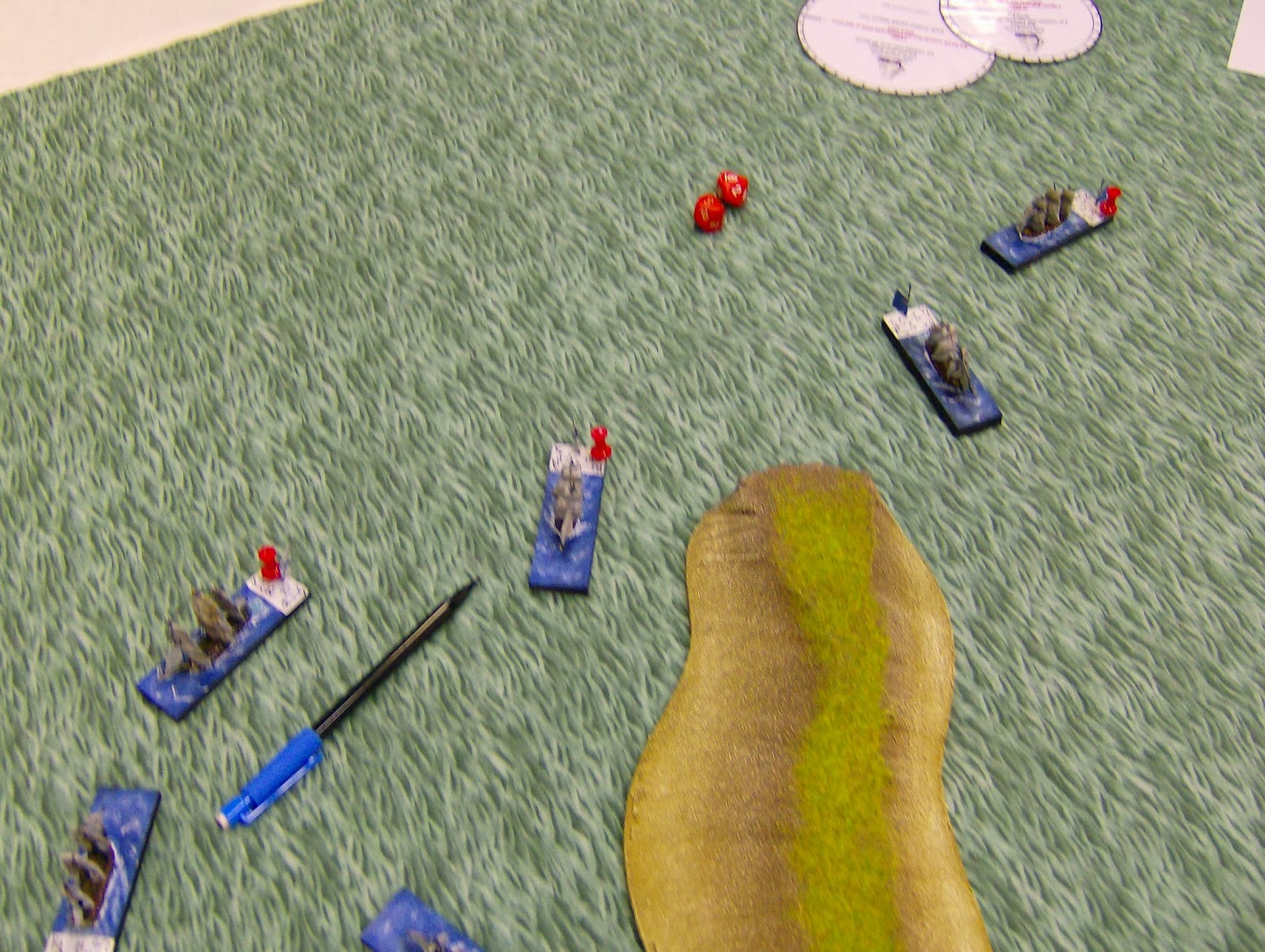 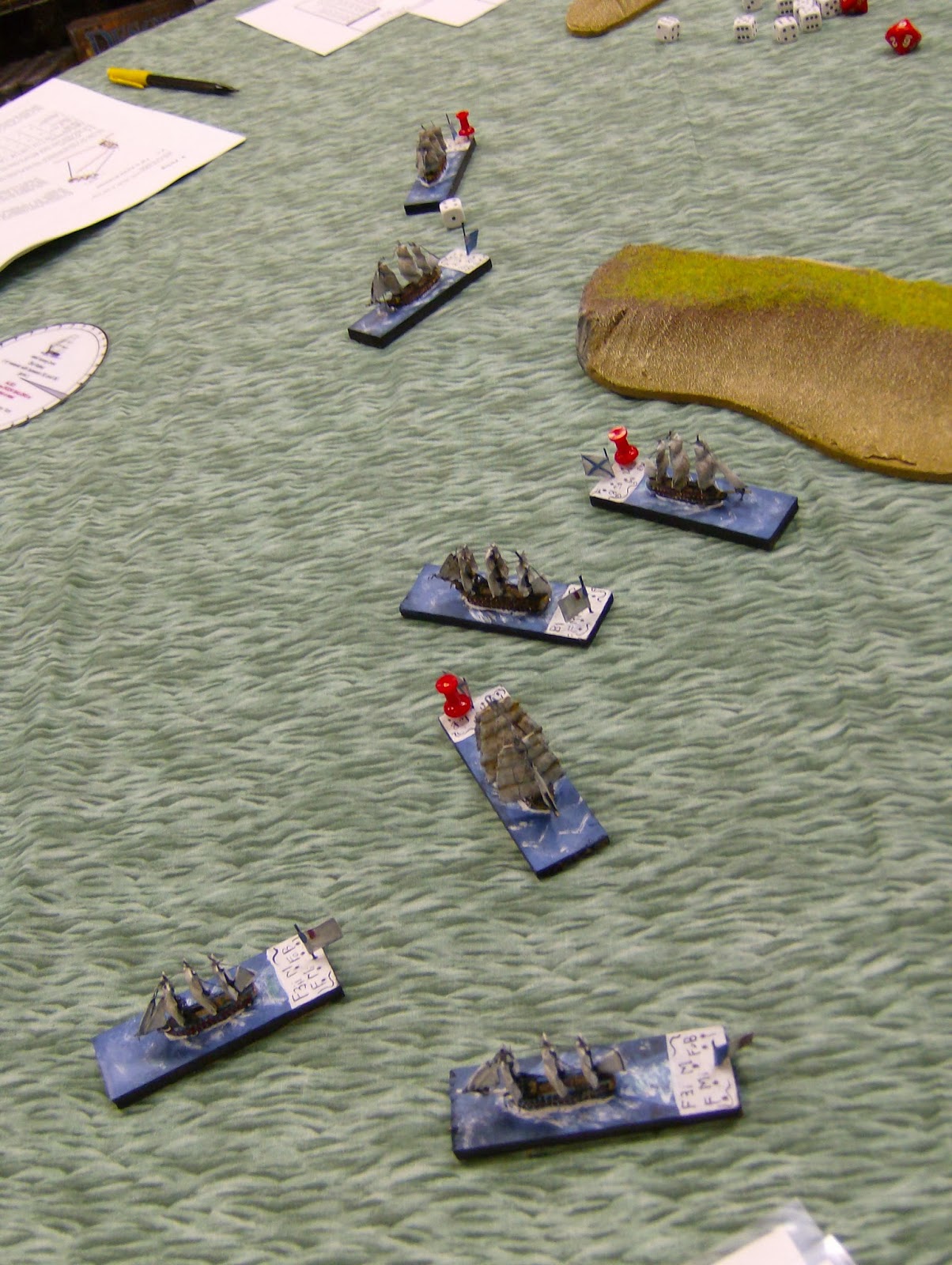 The decisive point came when the French admiral, fearful that the Anapa and Tonnant would be able to catch up on the Algeciras that had received steering damage, ordered the fiesty Captain Lucas to take the Redoutable and slow the allied pursuit. 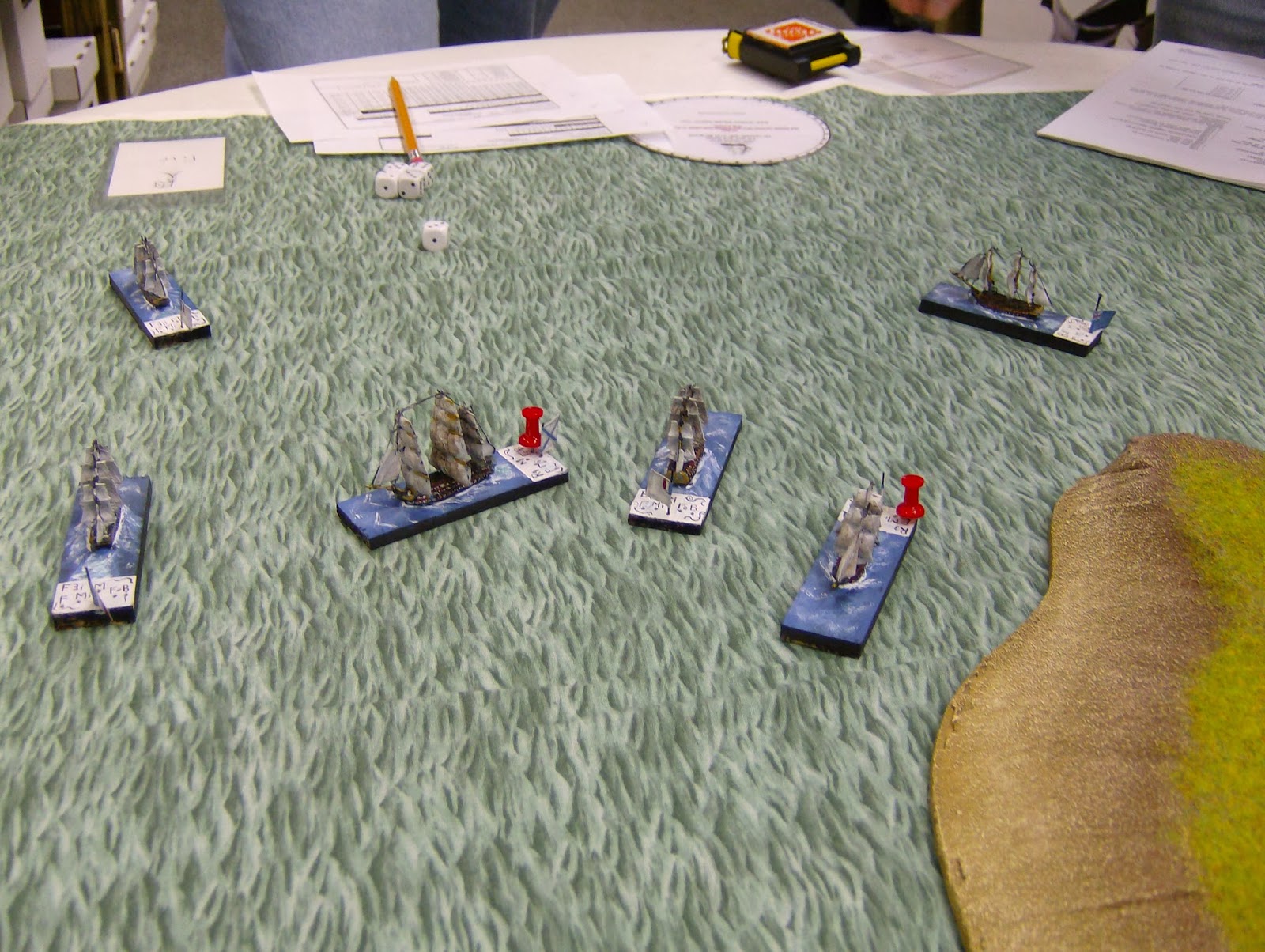 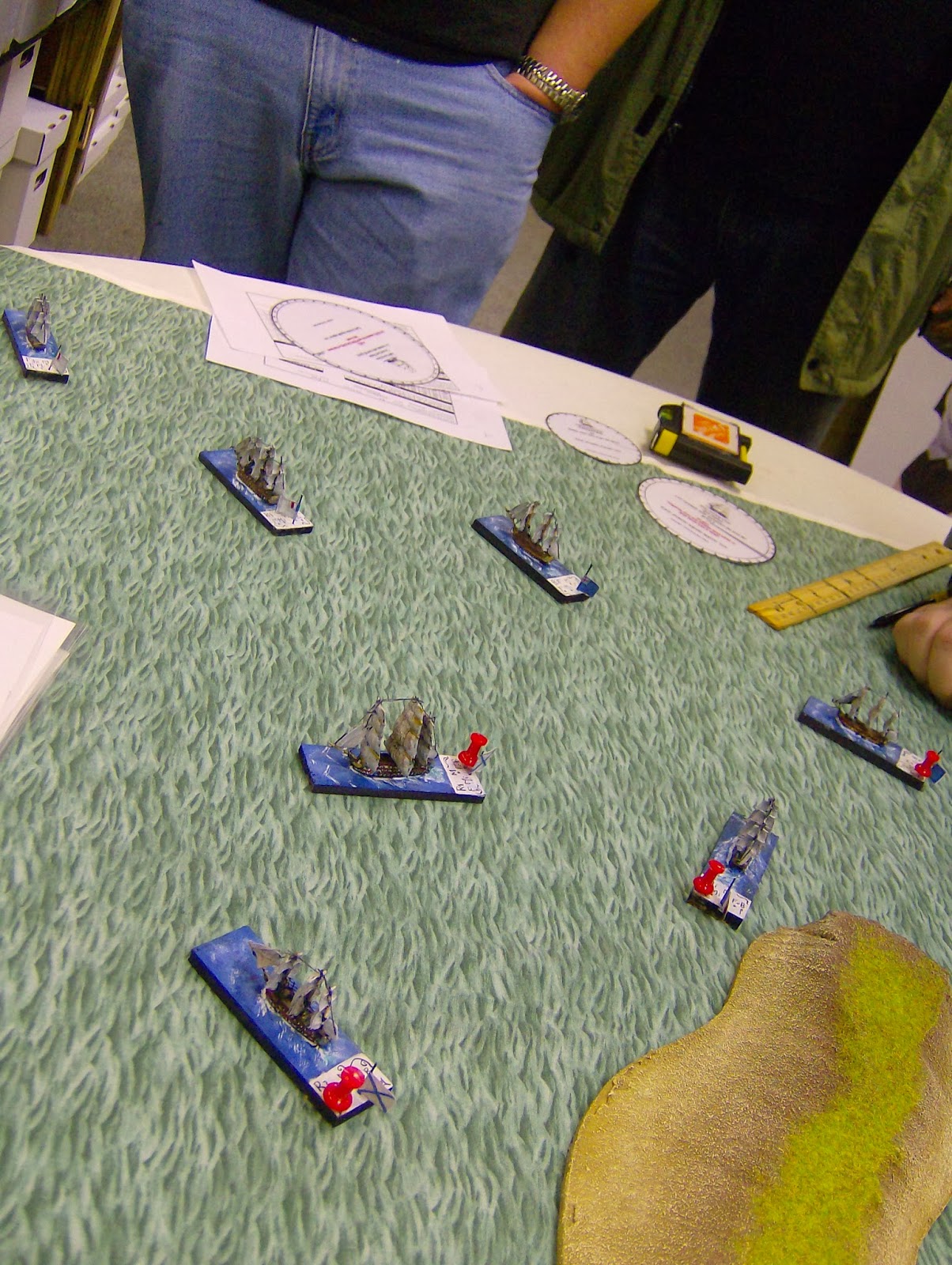 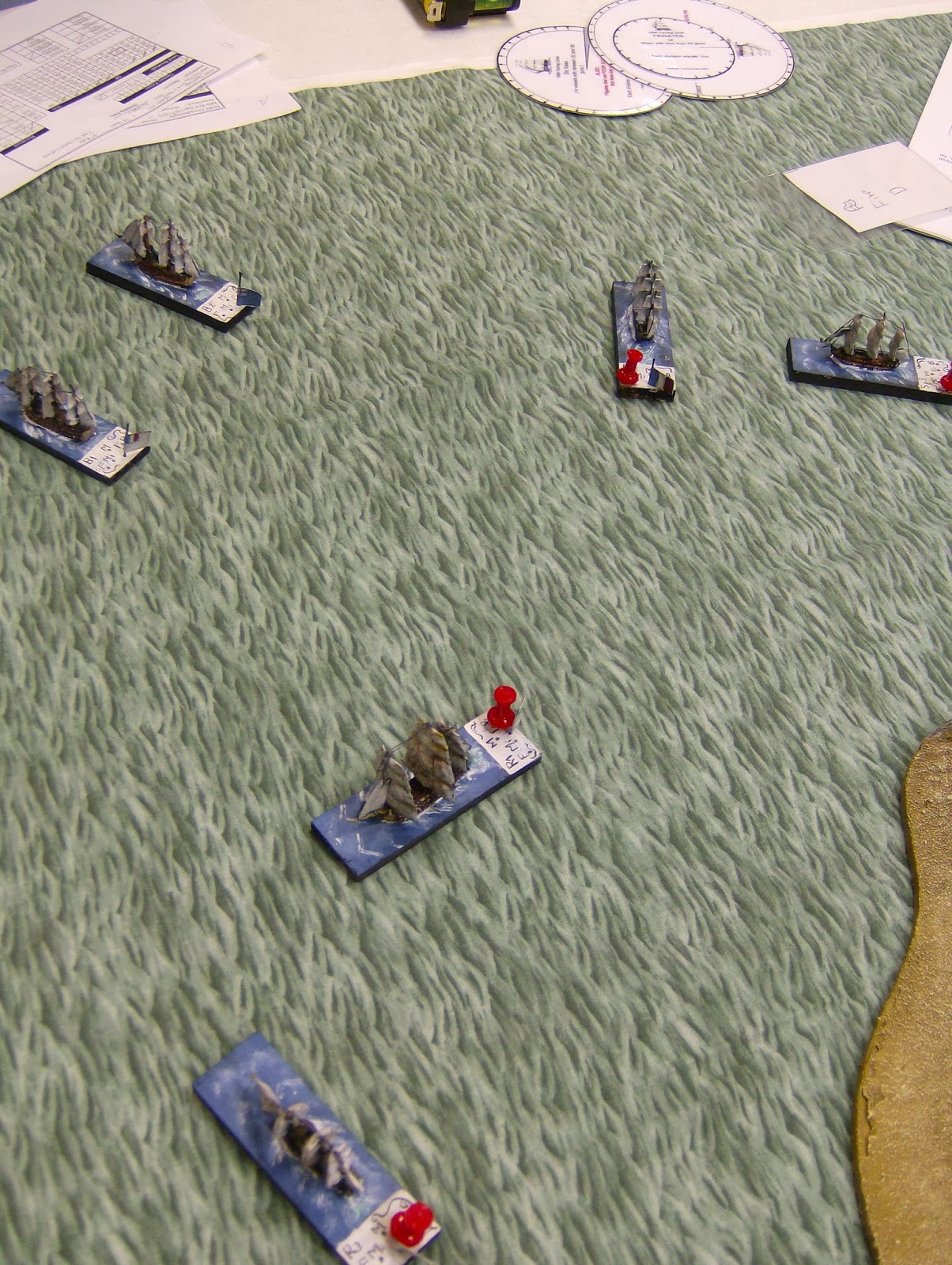 The Redoutable lived up to its real namesake, raking the Anapa, blasting the Pavel and the Tonnant and running around the three ships. However it also suffered considerable damage. A change in the wind favored the allies and gunfire from the Pavel and Tonnant mercilessly smashed on the Buccentaure. The French admiral and sailors refused to strike, and a devastating point blank range broadside by the Tonnant sent the Buccentarure to the bottom of the sea just as the Algeciras reached the safety of the open sea. 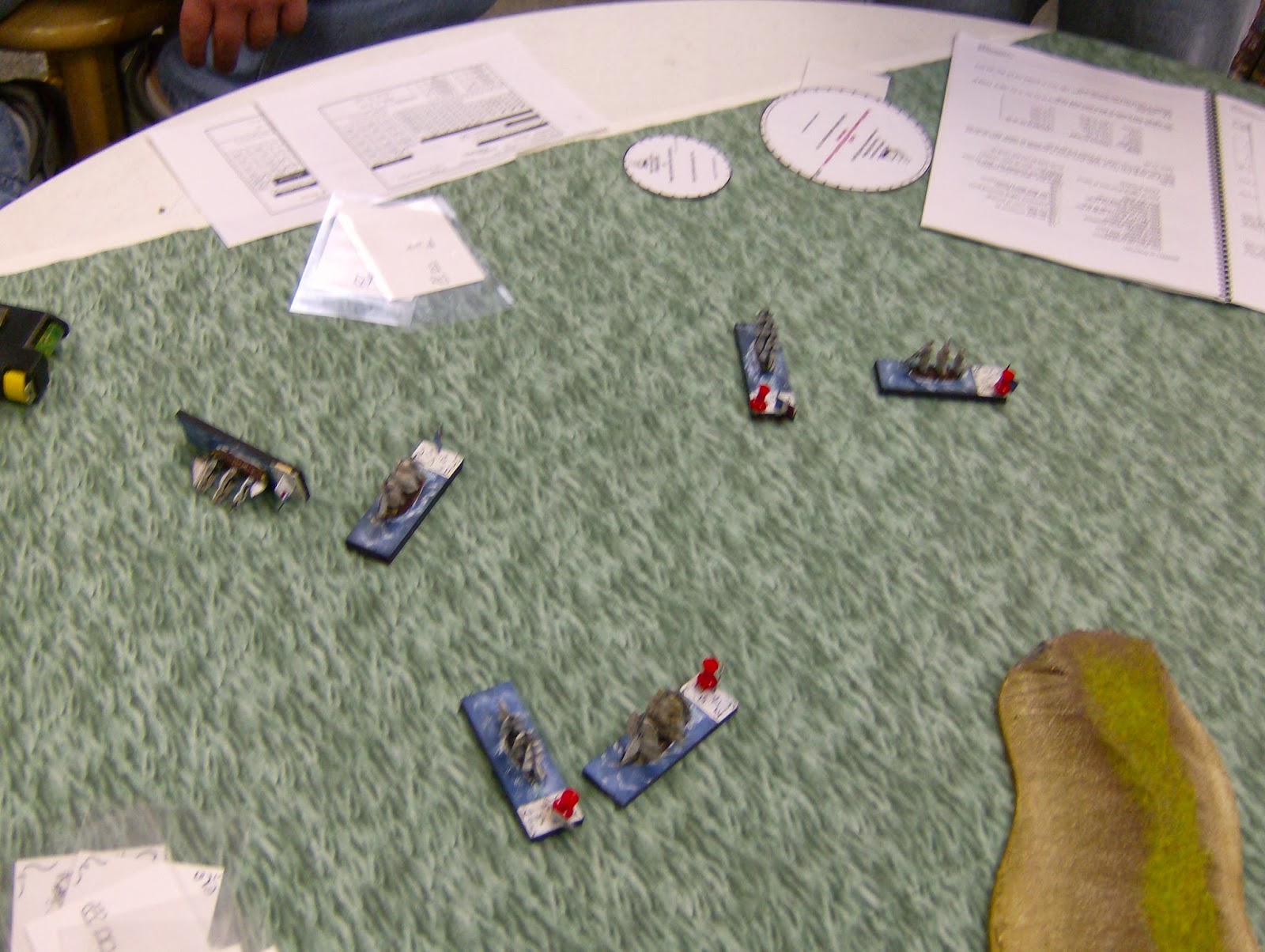 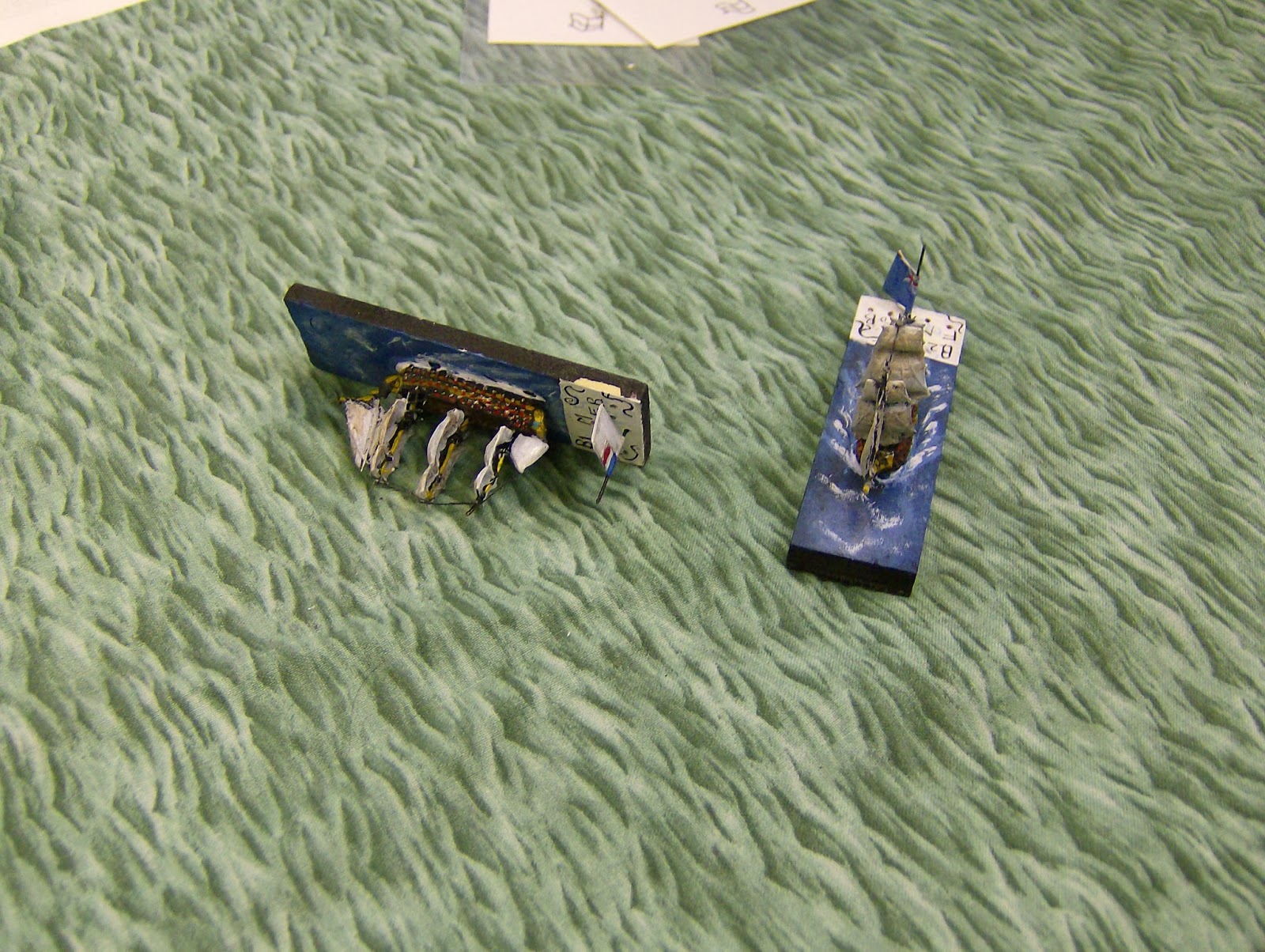 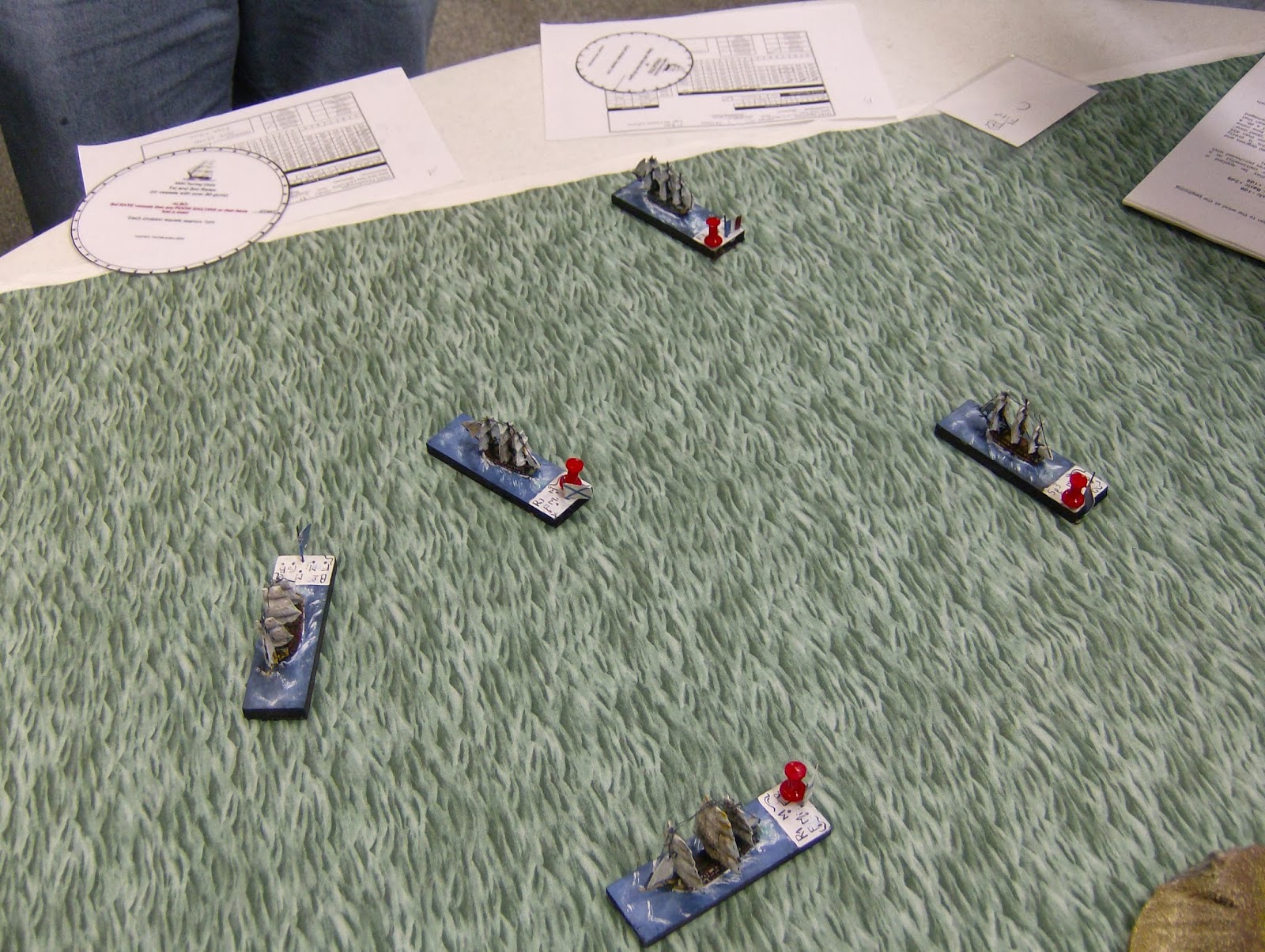 The Redoutable also made its dash for freedom. It almost escaped. Only 4 cms from the table edge, and on fire it EXPLODED into thousands of pieces after a rake by the Mars. 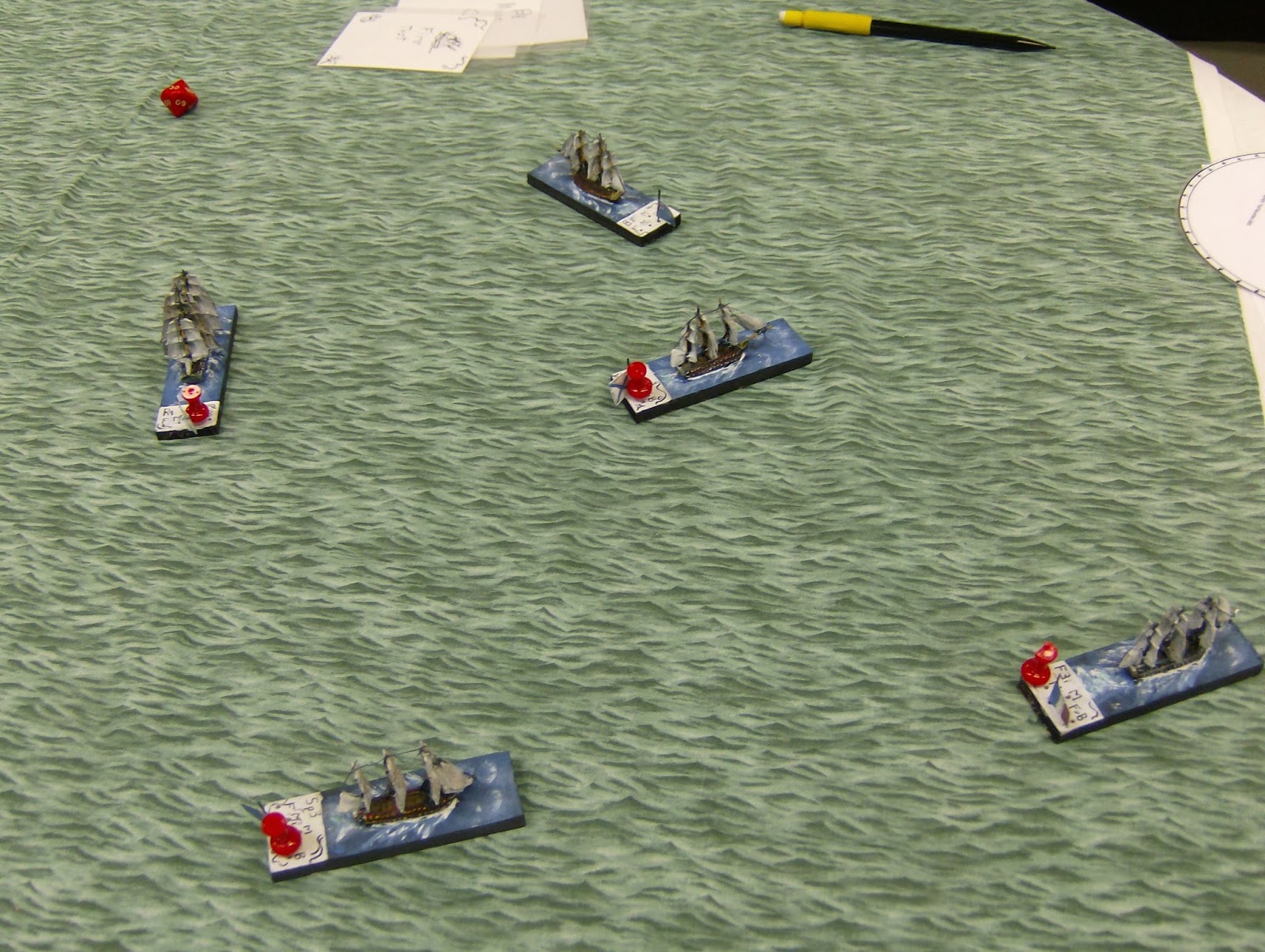 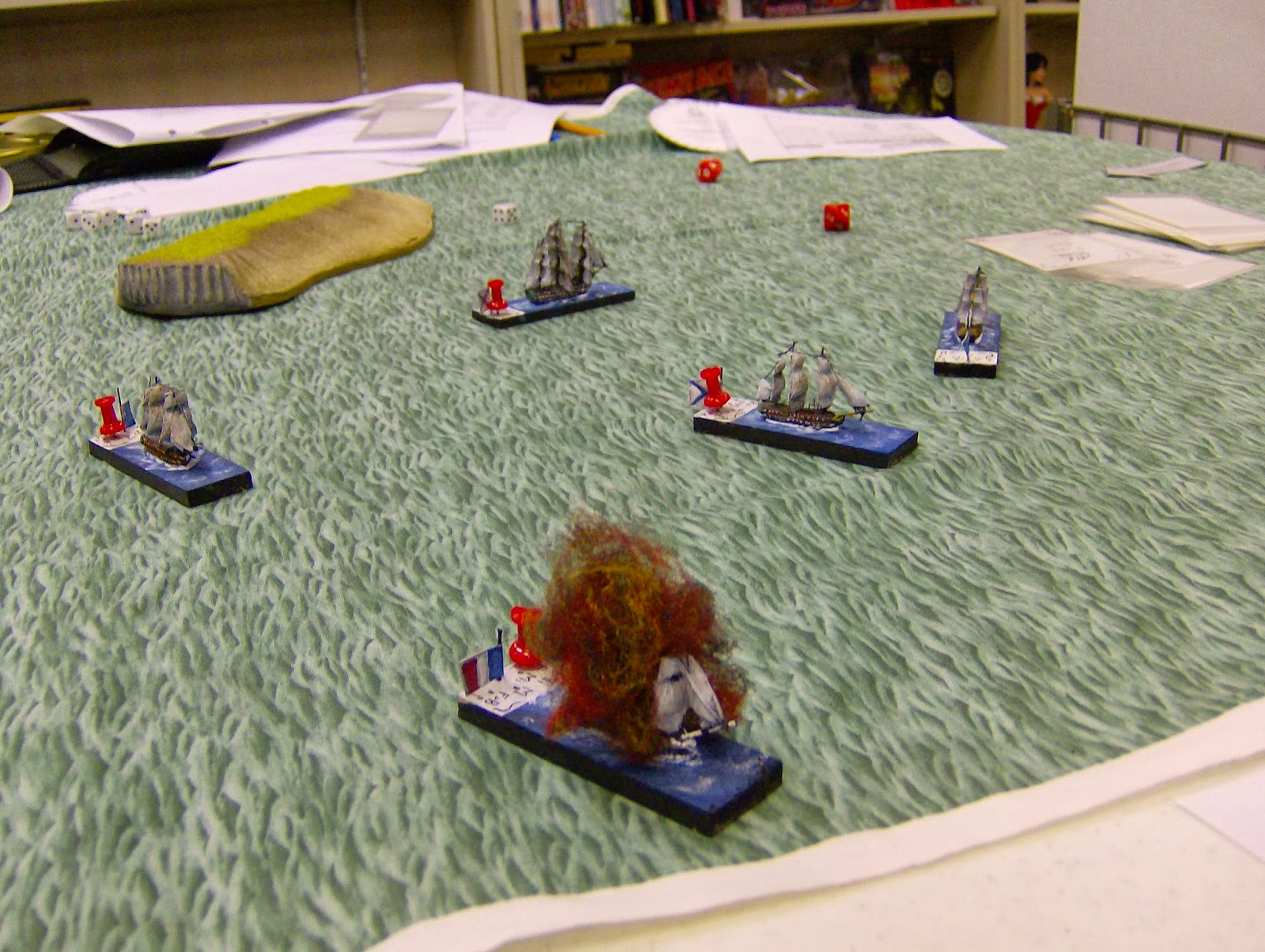 Thus the Allies won a tense and bloody game. Ships received multiple rakes, lost masts, suffered High Officer Casualties, and were multiple times on fire, but the crews refused to strike. As such this fight ended up being very deadly with one French ship sunk, and one exploded.

Buccentarure (Sunk 100% damage, on Fire at least once)
Algeciras (37% damage points lost-steering damage- raked at least once)
Redoutable (Exploded at 25% damage, after Fire)

Beyond the gaming I got some painting done. I received, promptly I must say, my order of pre-Dreadnoughts from Wart Times Journal and it was great.

I ordered the Mikasa and Asahi from the Japanese fleet of the Russo-Japanese War. Both are nice sculpts. 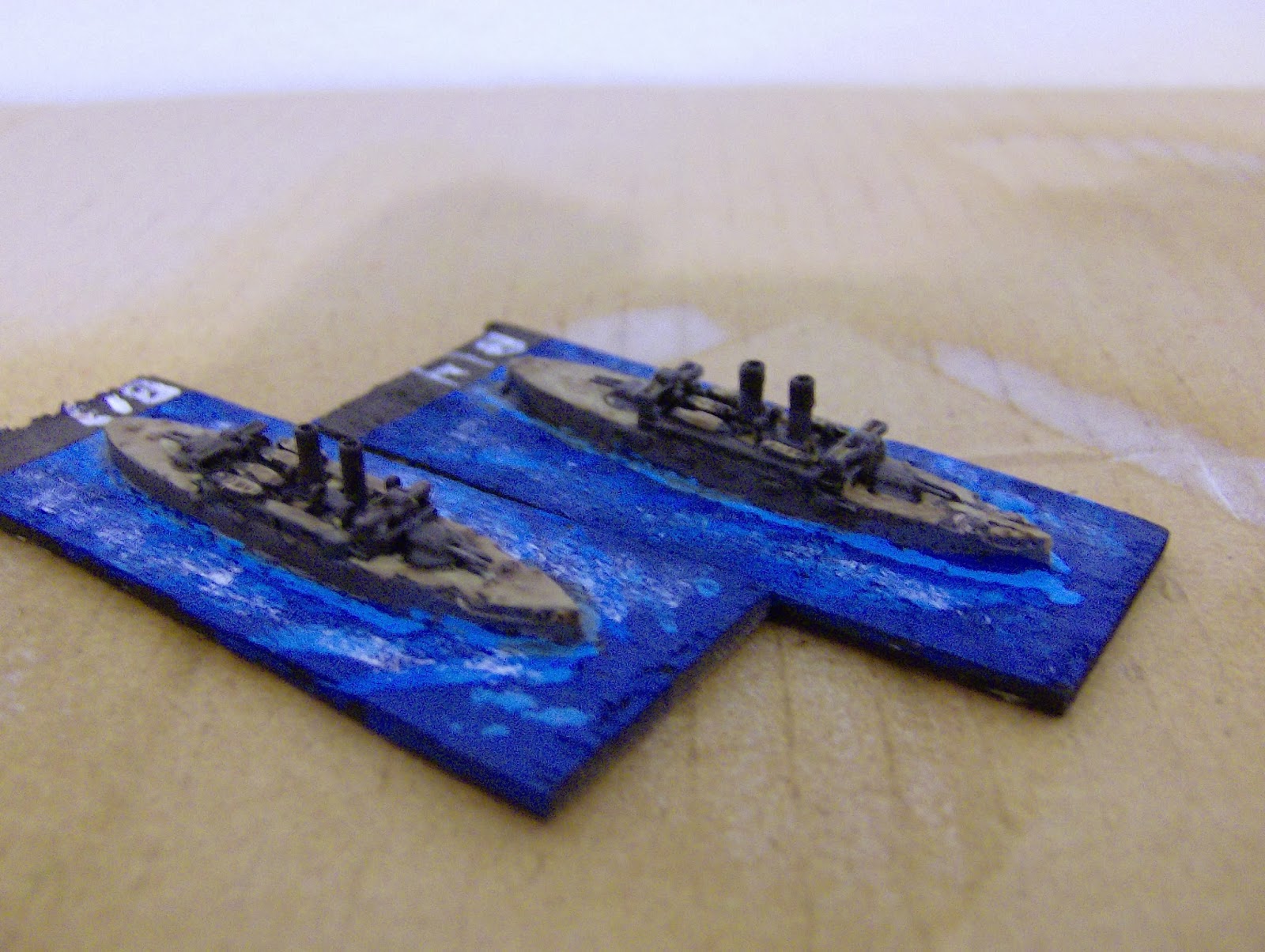 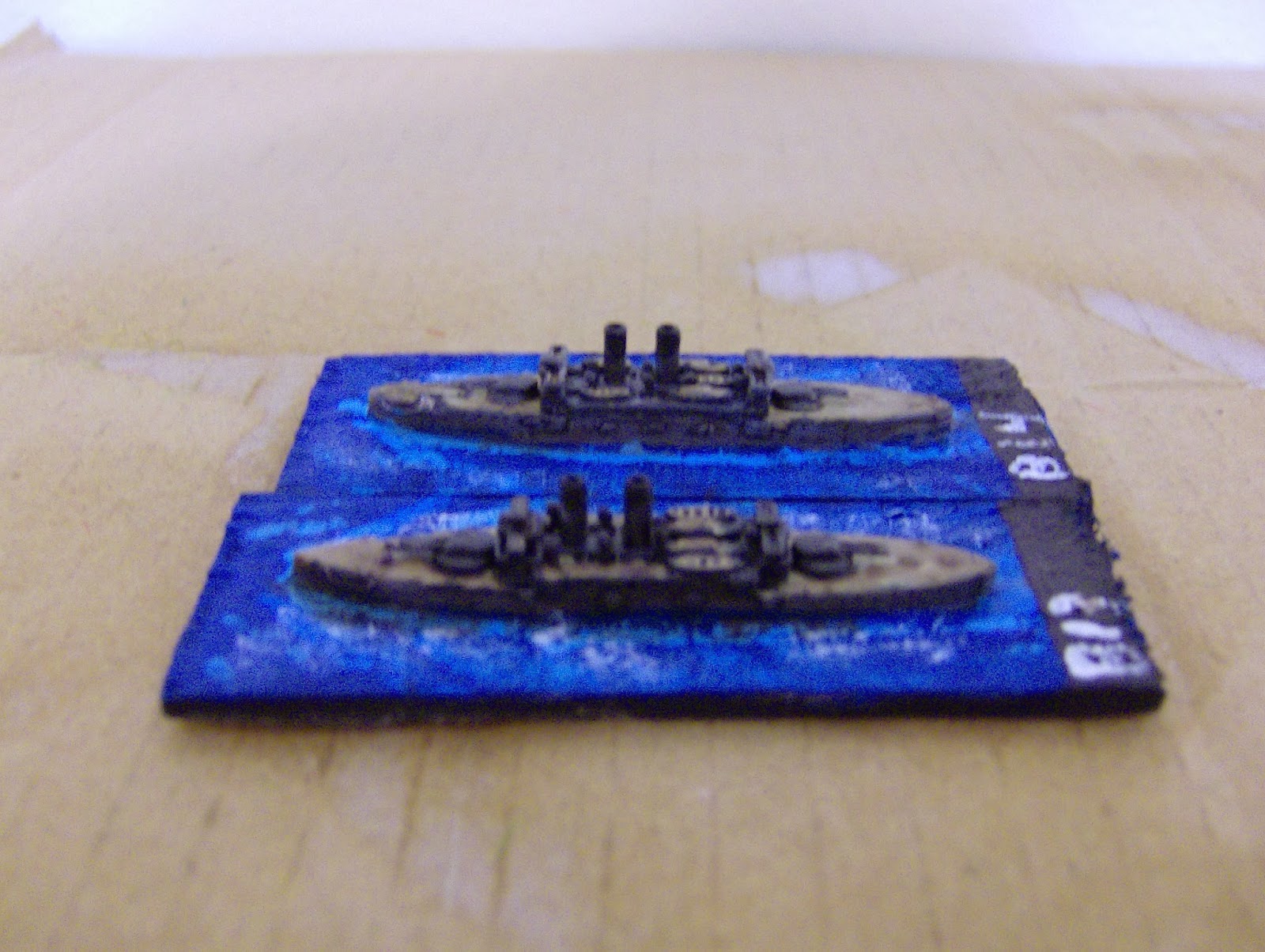 I also ordered the two new Brandenburgs for my Balkan War fleets. 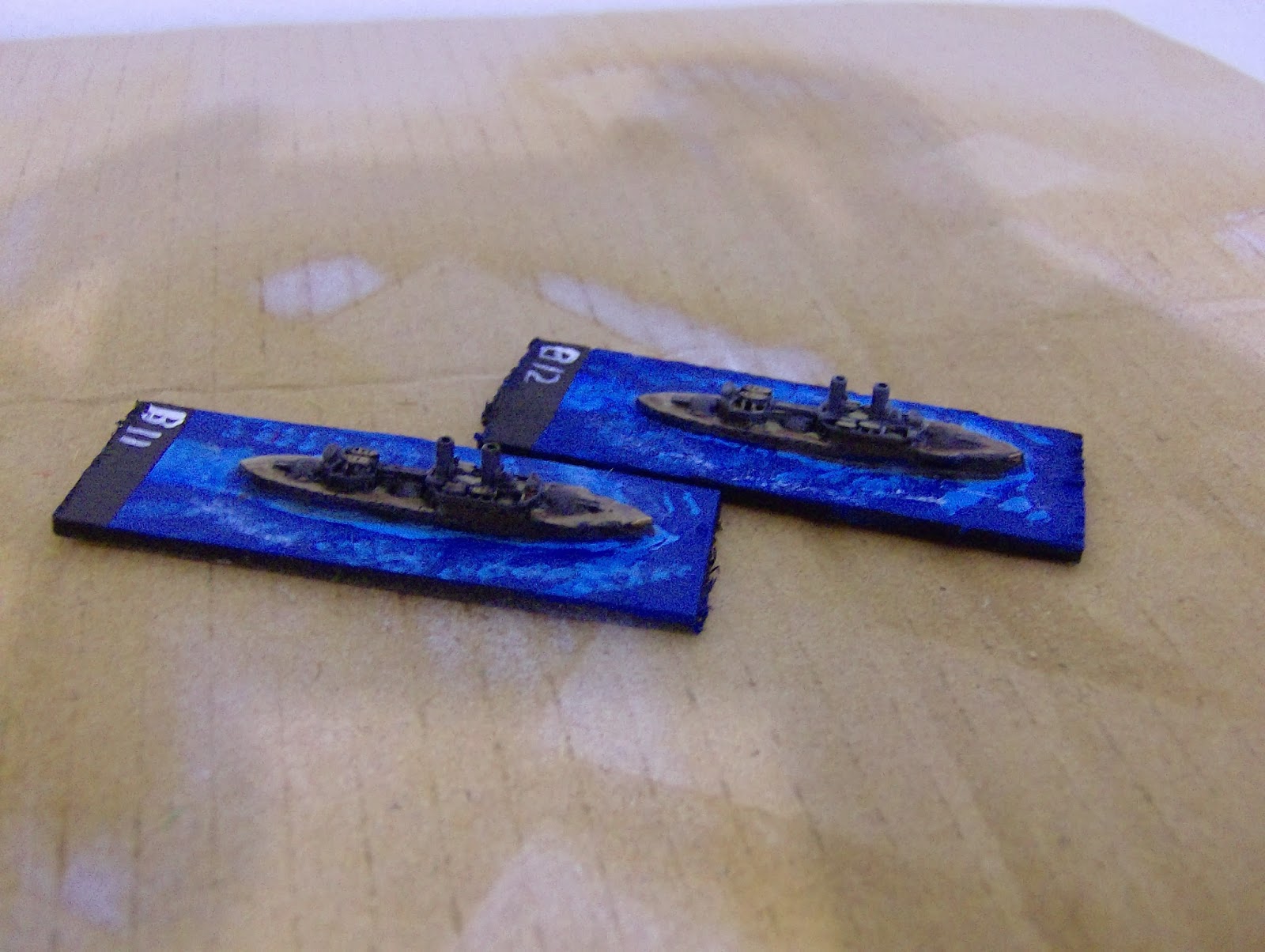 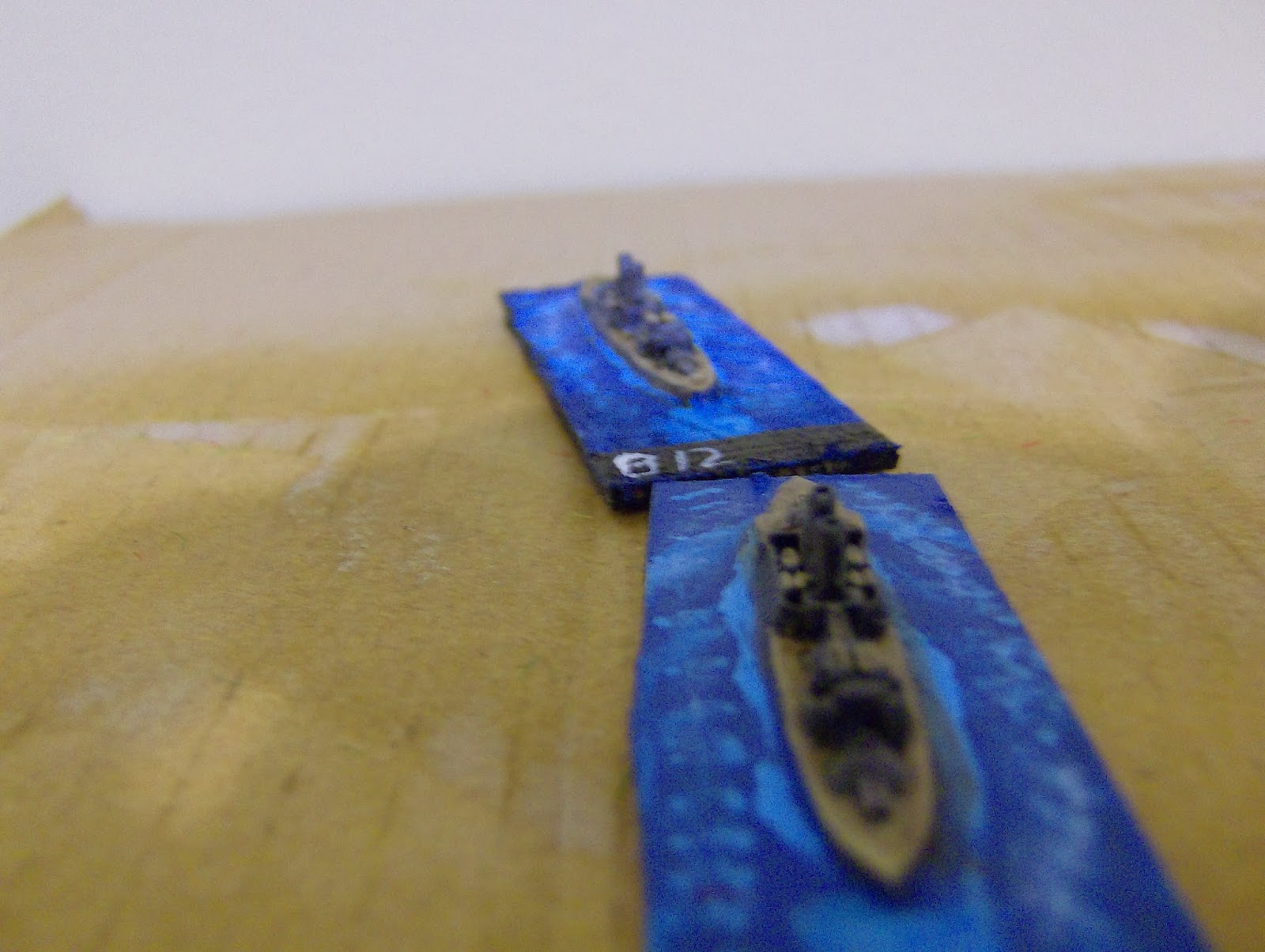 Finally the guys at WTJ were nice enough to make the only available in 1/2400 Hydra Class ships (a unique class of three ironclads built in France for the Greek Navy in the 1890s, which served in the Balkan Wars). These were nice sculpts. 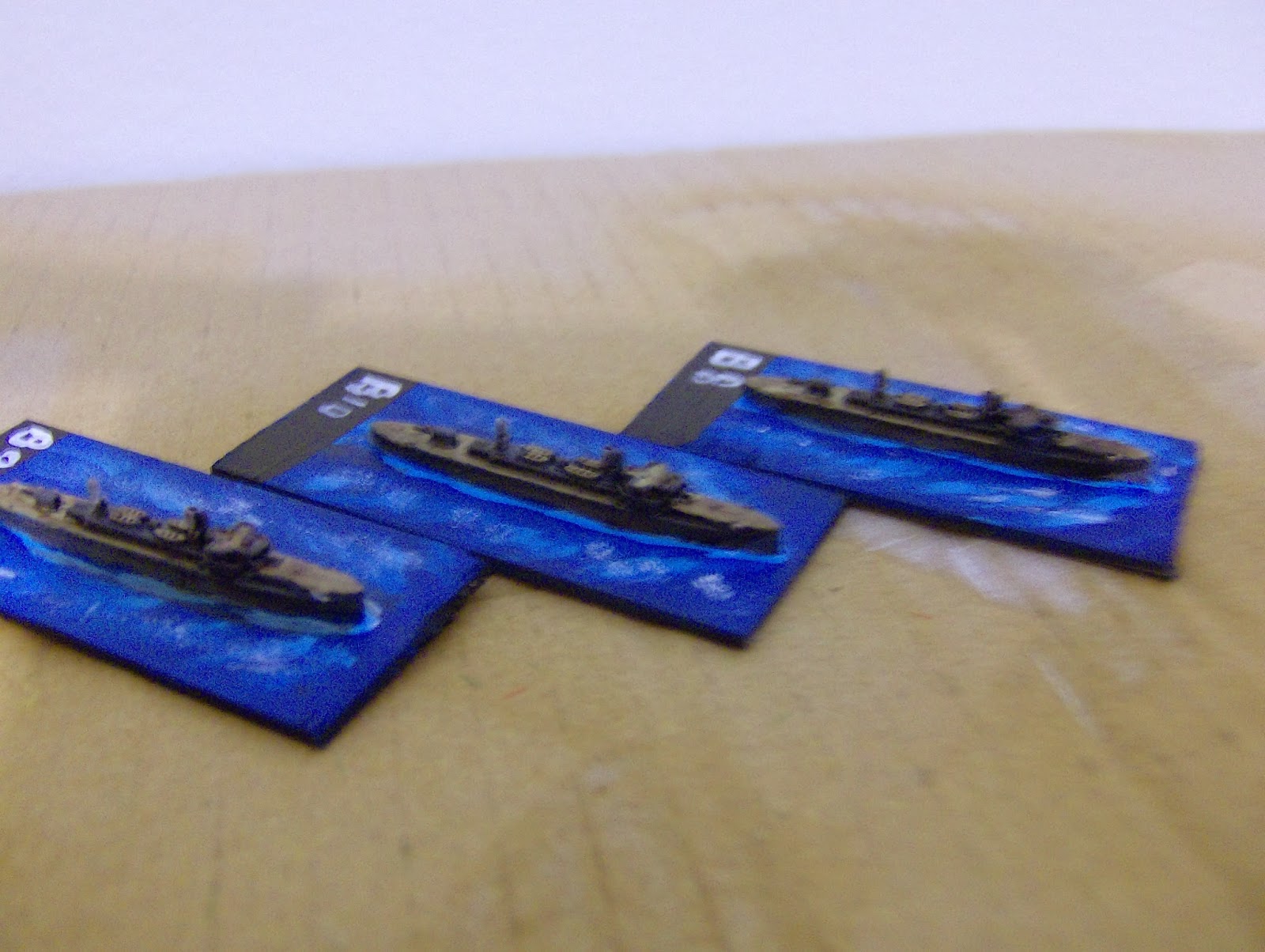 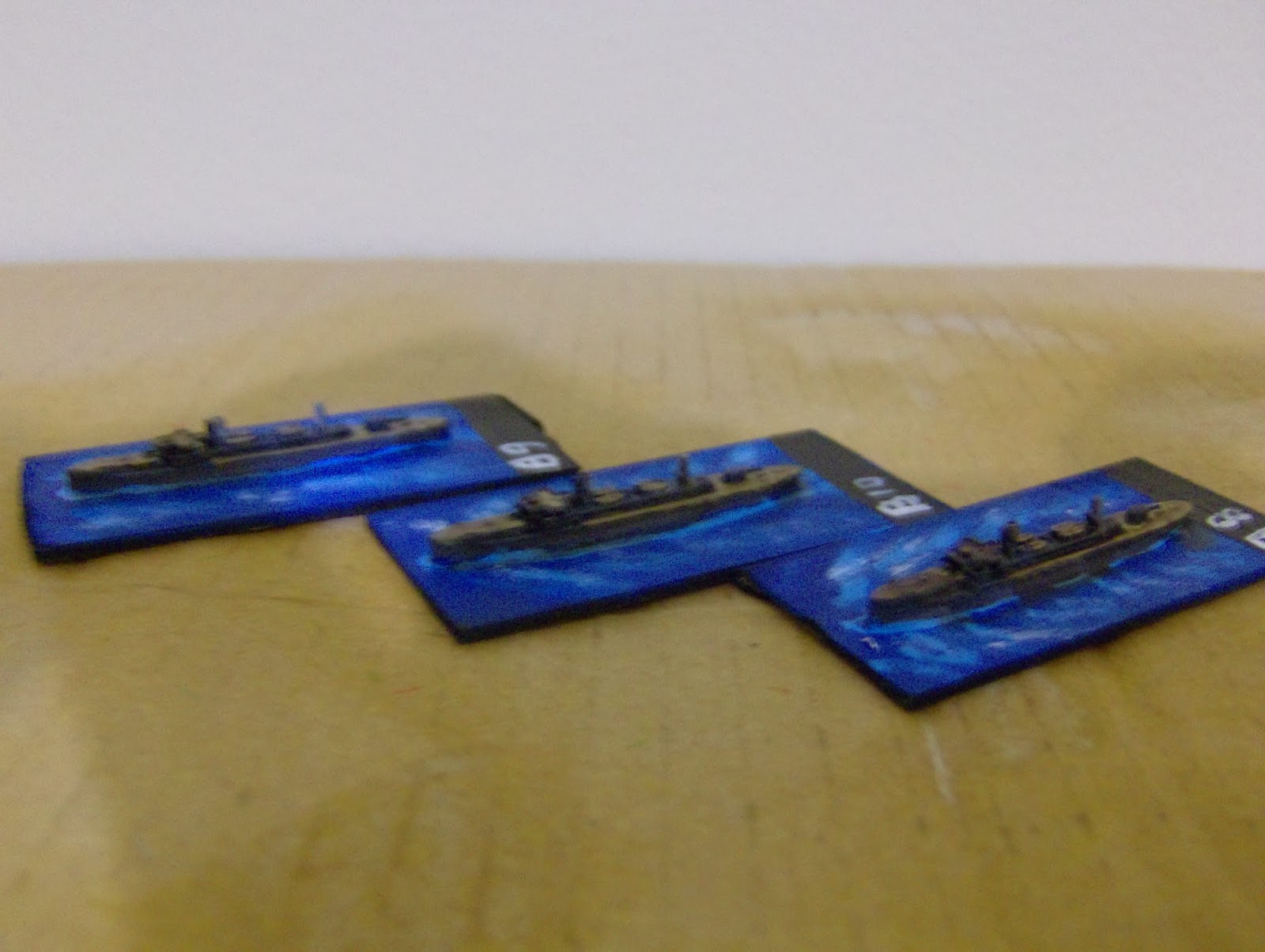 The only ships left for representing the major surface actions of the Balkan wars are the Ottoman reconstructed ironclads and the Averoff (which exists in 1/2400 by Panzershiffe but which I would prefer by War Times Journal).

I also painted the GHQ HMS Colossus, bought over the Winter Break at Athens Miniatures in Athens Greece (Ippokratous) which I will use as a stnad in for the never completed Greek Dreadnought Salamis 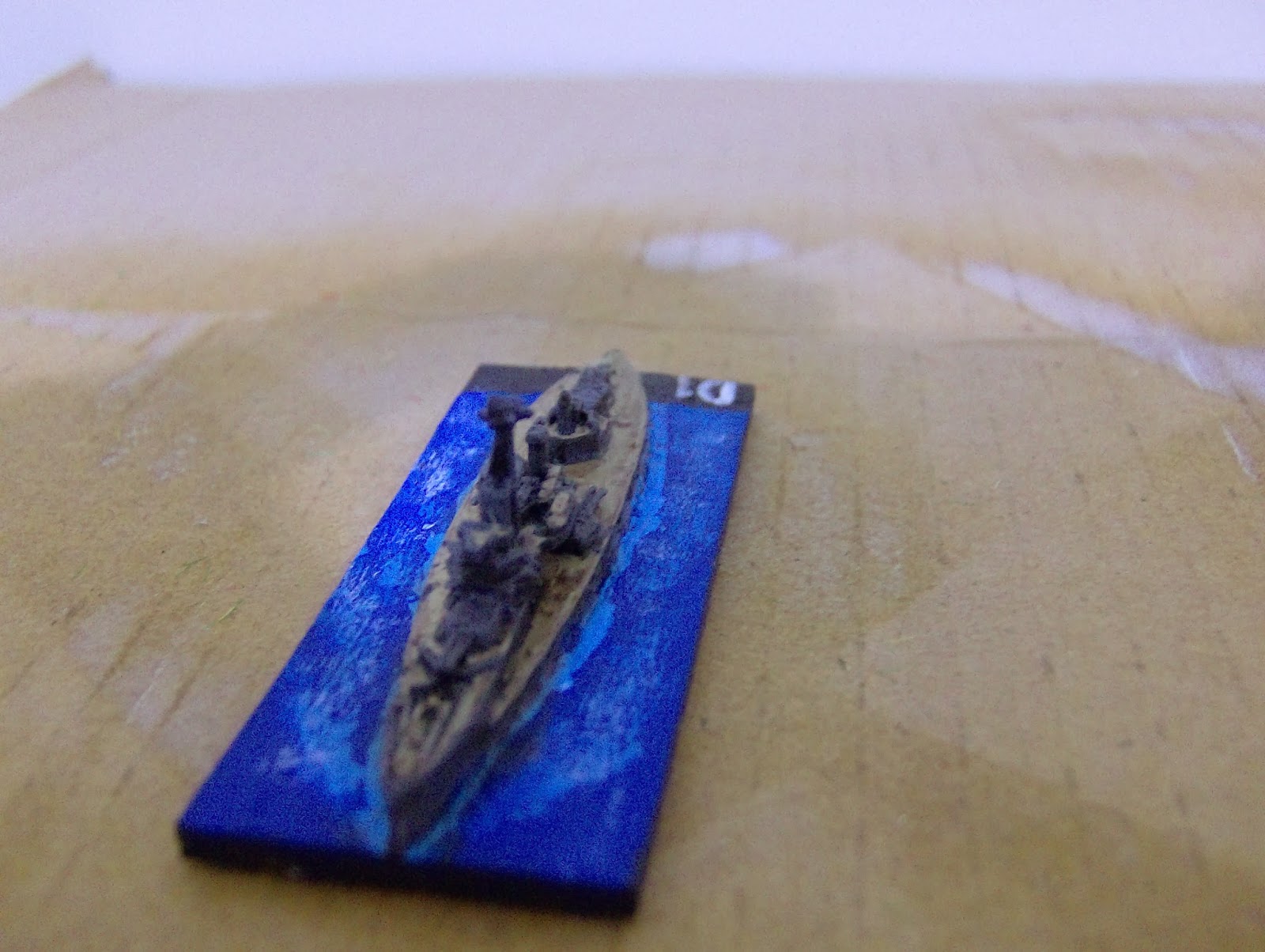 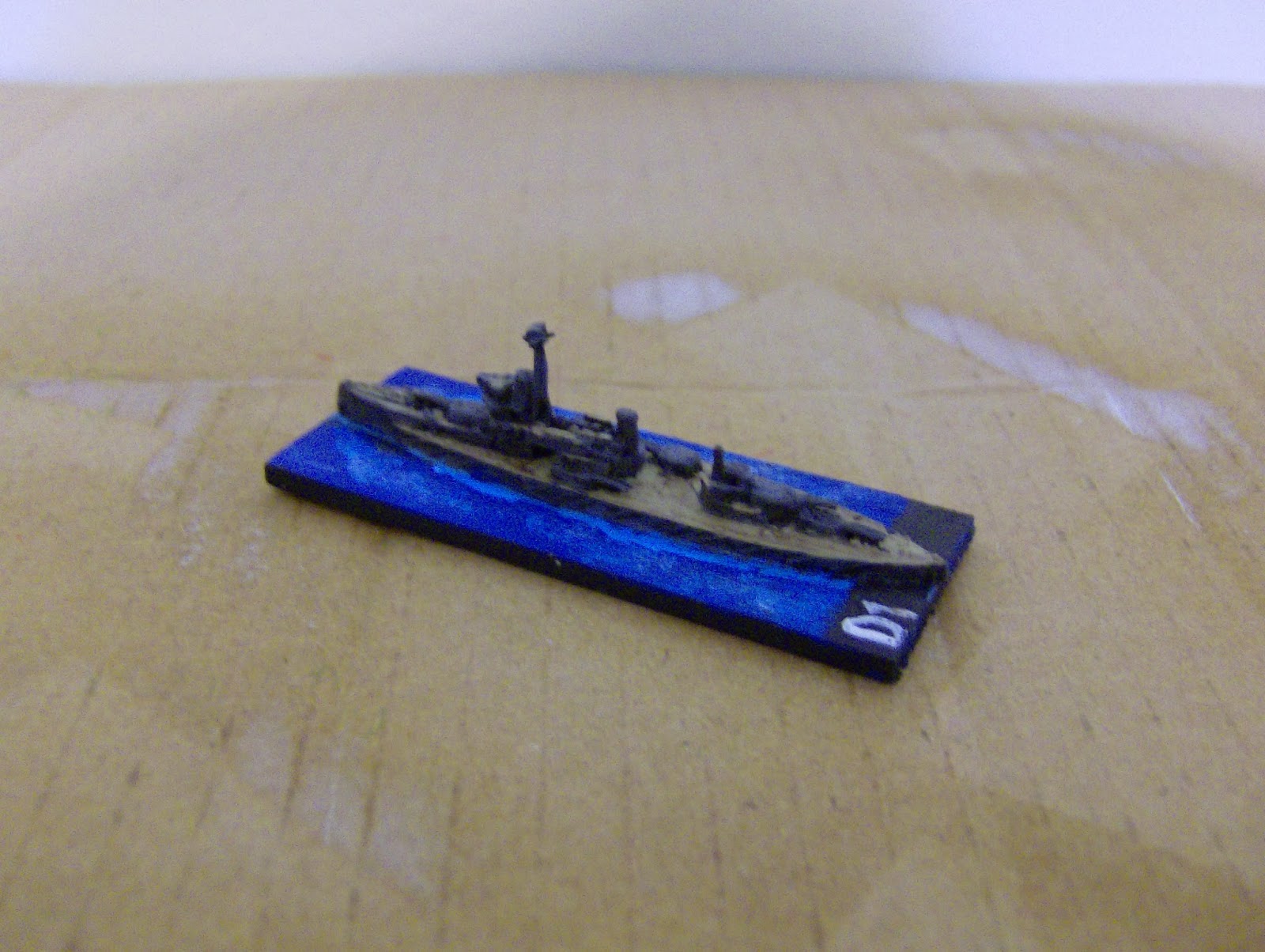 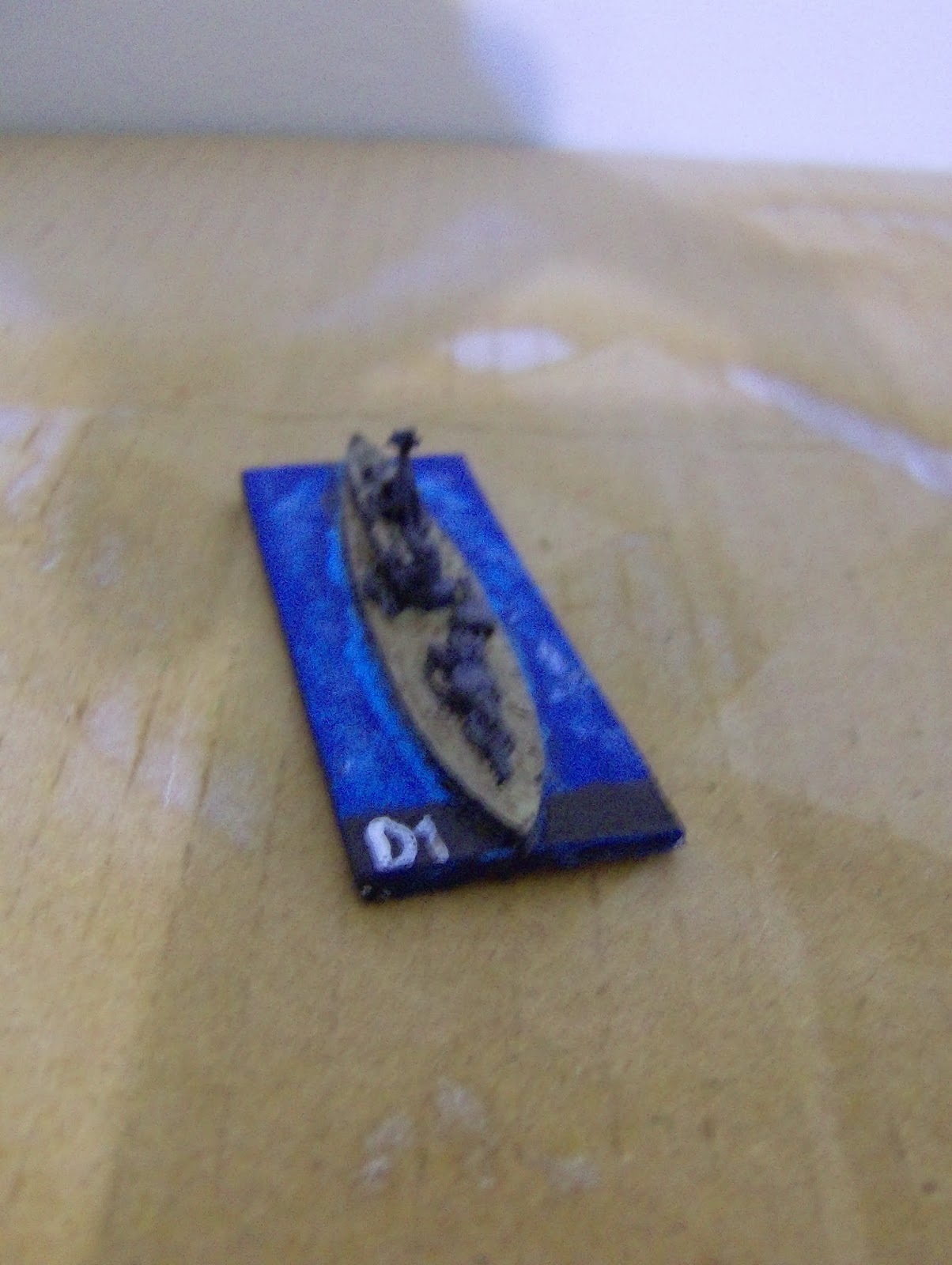 Finally, and following my thoughts in my previous post, I decided to enter 28mm Napoleonic Wargaming, since Keith has a bunch of Perry British and thus I got someone to play with. I started with 9 French Voltiguers and 9 Grenadiers for Line infantry from the Perrys. We will begin playing skirmish games using Song of Drums and Shakos, Smooth and Rifled, or the Skirmish Rules from Paddy Griffiths superb "Napoleonic Wargaming for Fun". As we built up forces we may give a try to the Brigade and Divisional game in those Rules. 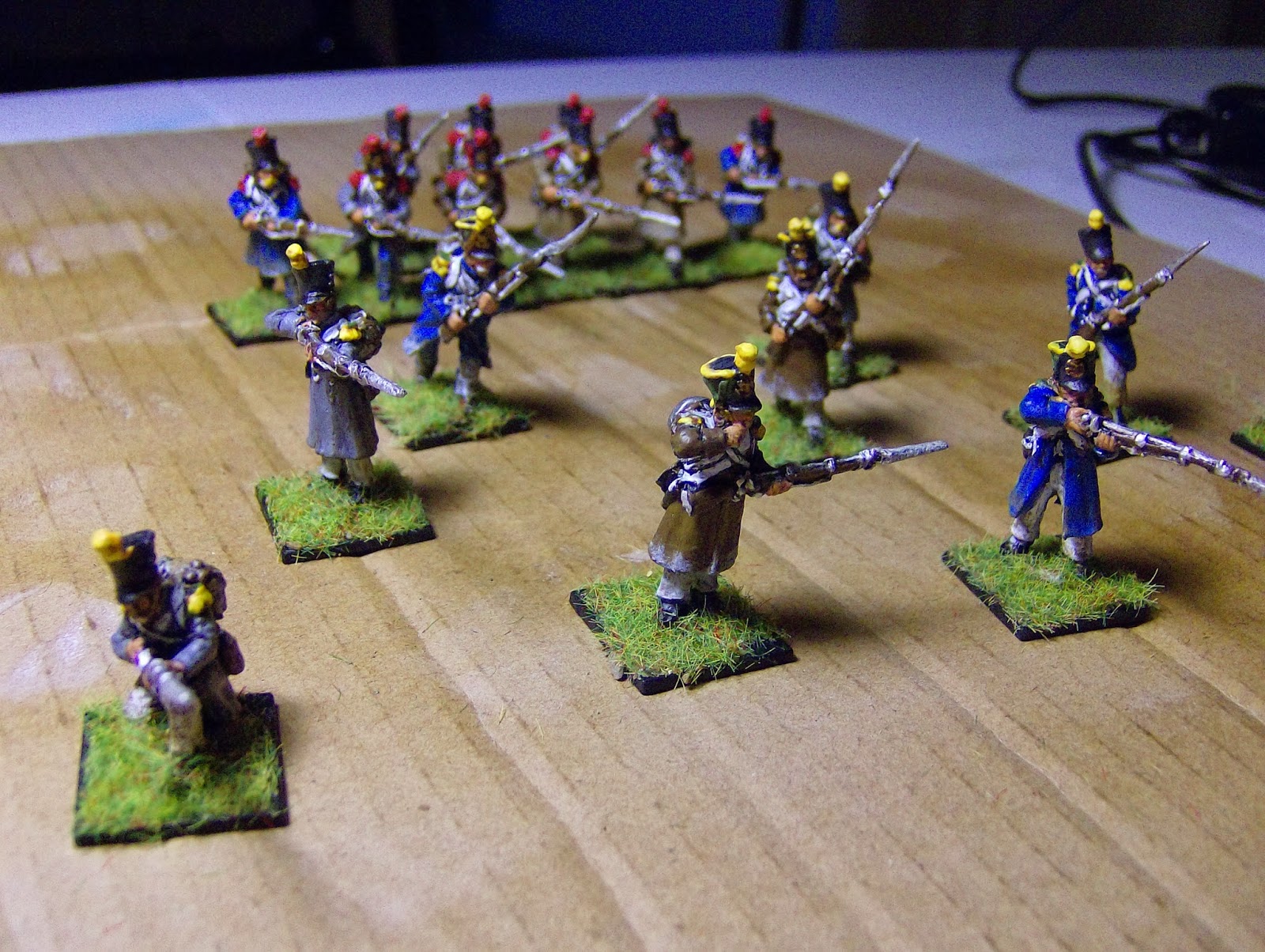 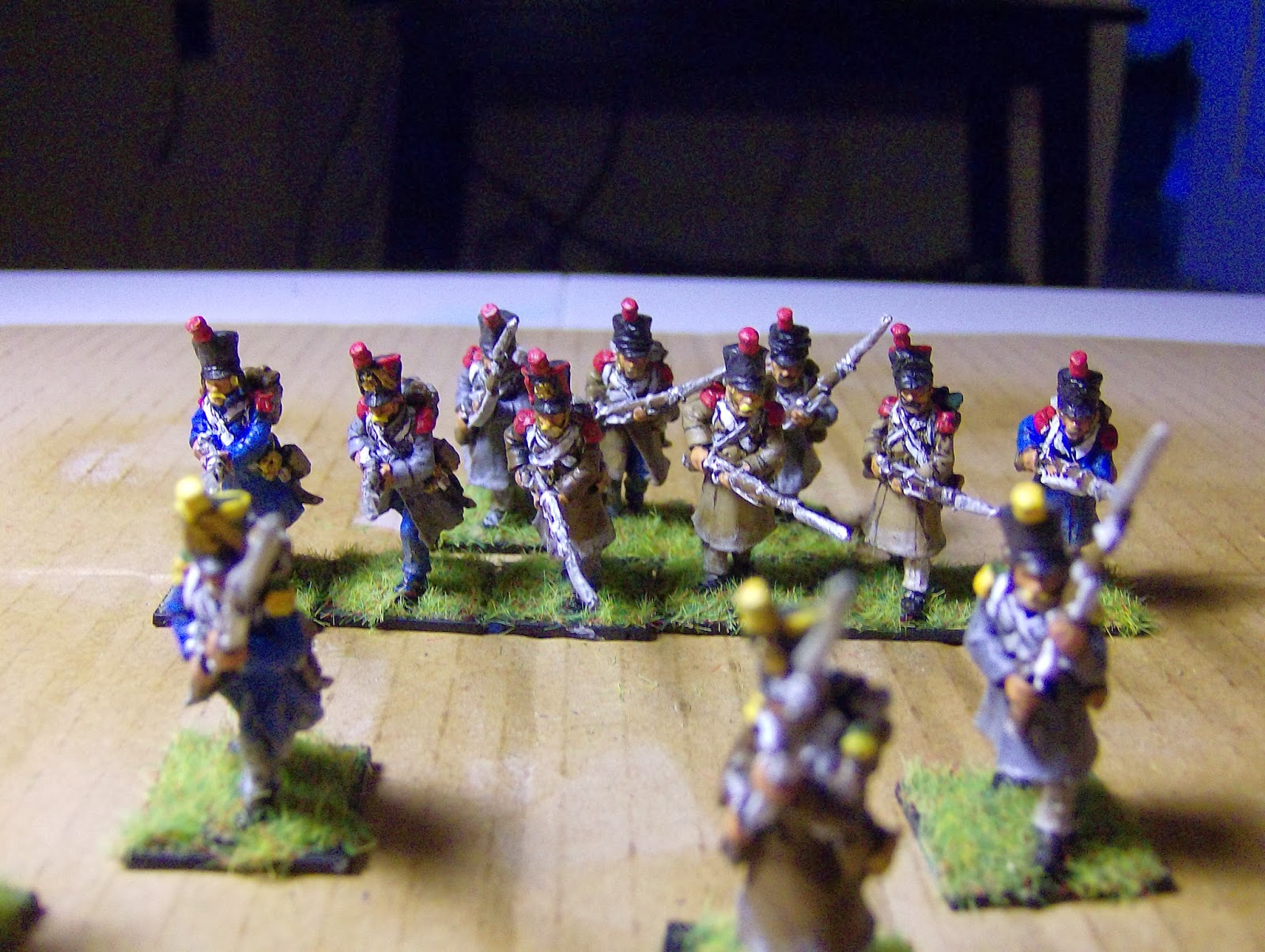 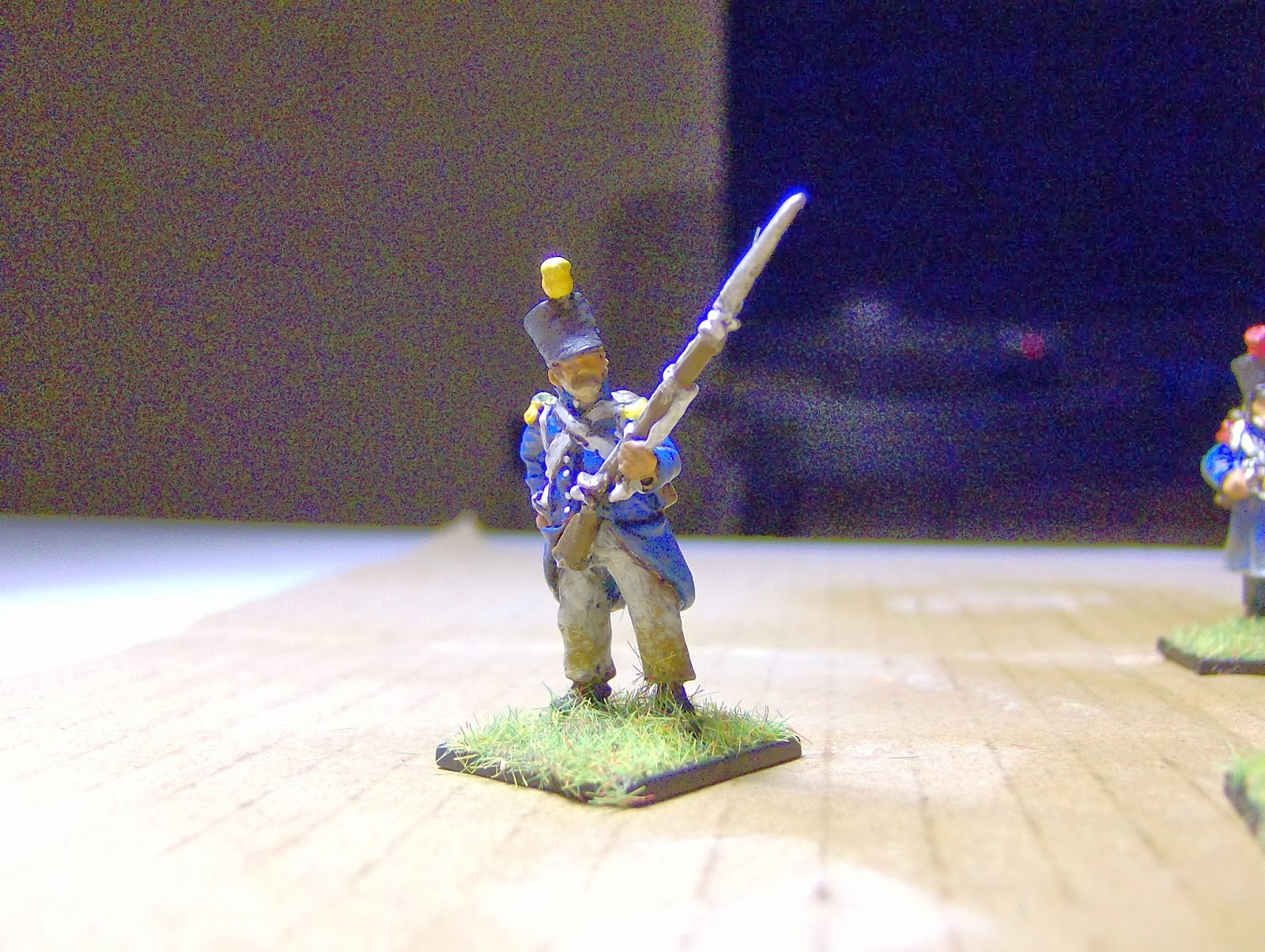 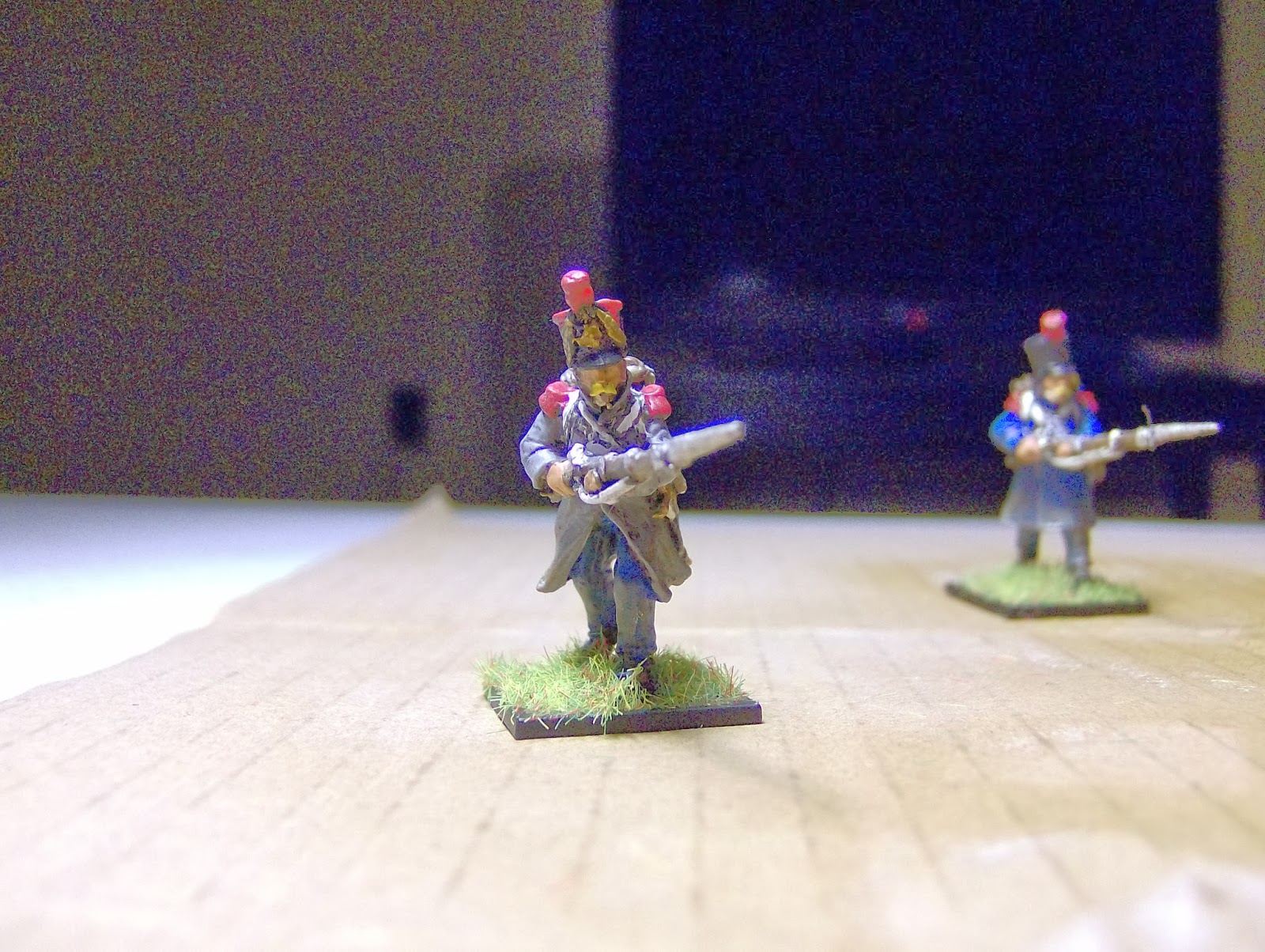 I painted my miniatures in a general color scheme, without a goal of representing specific units or battles. My goal is more about having fun, and somewhat representing the vista of colors of a Napoleonic battle, rather than simulation. So any mistakes (And there are some) are my own.