Happy New Year to all of you

I have not posted for a long time. Between traveling to Greece for two weeks over winter and revving up the engines on my dissertation writing, and job search (updated my "professional" website after a long time http://ktravlospolisci.blogspot.se/p/research-i.html)  I have not been able to do much on the hobby front. I also got a case of the "painter's doldrums" and had little interest in touching my brushes.

I did get to try out my Warhammer1000 armies and enjoyed two games with friends in Greece. Beyond that I mostly got a chance to play board-games. I bought Strike of the Eagle and I must say I liked it a lot. I have tried my hand at wargames in the past (Prussia's Glory II and Jutland) but found the counter games a bit aesthetically not pleasing and a bit too complicated for what I like. Strike of the Eagle is both aesthetically pleasing for me and a easy to learn and easy to teach game. Beyond that I sample some comics this year Mignola's at al Witchfinder (good), Baltimore (not so good), ASP "Iron" (not bad a bit overhyped) and Tardi's Adele Blanc-Sec (a good old french style comic).

Beyond that I wish to take stock of what I have in miniature gaming projects, completed and not

1) BFG 8 ships: Completed using SITs miniatures: I might wish to add a couple of larger DN size ships. This has been my go to game for our C-U gaming group. 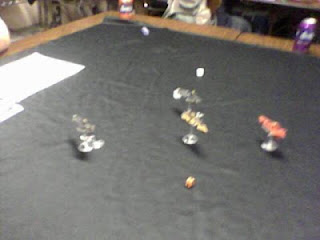 2) DBA 8 armies: Completed 4 matched armies, near completion a 5th (Roman Republicans), Still needed  an 6th (Iberians), 7th and 8th. My goals is to have a matched pair from each army book (currently I have III,IV). The second go to game for our C-U gaming group when I host. 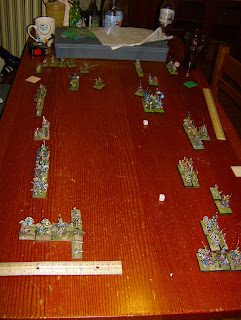 3) Klingon Armada 8 ships: Completed. This might end up being sold to finance other projects. Alternatively I will use the minis for BFG. I do not think I am going to expand this project.

4) Warhammer1000, plans are to have 1000 points from each army in the warhammer universe, but I might just go for 8. 2 Completed (Dwarves, Orcs and Goblins), 1 near completion (Brettonians), 6 under construction (Empire, Dogs of War, Beastmen, High Elves, Skaven).


5) Might and Reason: My initial plan was to build just one army. I have the miniatures but have not worked on the  project at all. I think I might reconfigure base sizes to create two armies. I like the rules system and the period, but do not feel the urge to make a major investment in it by myself.

6) Baccus 6mm Napoleonics: On hold. I have painted most of the infantry for the French. But my friend who co-financed the project has not worked on his Prussian's at all. I am also not enamored with the Polemos rule system. It is not bad. It just did not tick for me.

7)" A coat of steel" 28mm WOTR side project: Since I am using Perry to fill in my Empire and Dogs of War I can also use those miniatures for medieval gaming. The Perfect Captain's A coat of steel rules are interesting.

8) Napoleonic Sea Warfare: I got Kiss my Hardy and a british and russian frigate. I have not played the game at all, but the ships are ready. I probably work this project on an ad-hoc basis with no clear goal in mind beyond having enough ships for a multiplayer scenario.

Generally speaking I am not in the mood for opening any new projects expect if I am 100% there are people who are going to join me. Otherwise I will have to built armies for both sides in a game and frankly it is easier to just buy a board-game. I really like painting but frequent doldrums and non-gaming life issues will interfere in slowing projects down. I also noticed that I am much more diligent and happy working on projects I know people are willing to play with (Warhammer, DBA) than projects that I have seen no interest for from others.  But we shall see. Miniature-Wargaming is partly an industry funded on fevers of activity and impluse sales :p

Have a great new year!