DBA is one of my favorite games. But when I came to Turkey I sold all my armies (15mm) as there was no interest in the groups  I gamed in. Now there is, and the 1/72 I have been collecting for Aurelian and Saga give me more than enough DBA armies. Today I went to Nacho, were me, Nacho and Oguzhan went through the ropes for DBA 3.0, All in all a good show. We got two games in, one introductory for Nacho and Oguzhan, and one between me and Nacho. We used my 1/72 Ostrogothic and Late Roman Army. 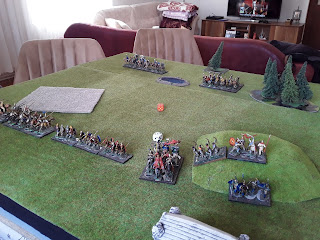 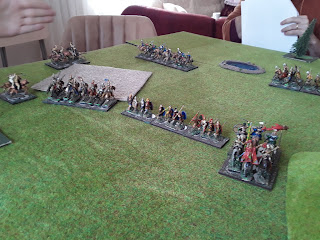 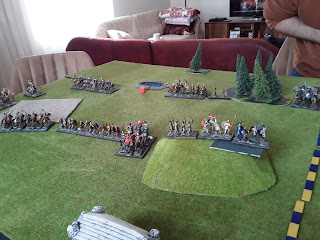 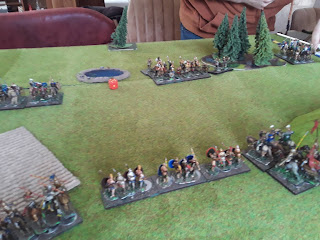 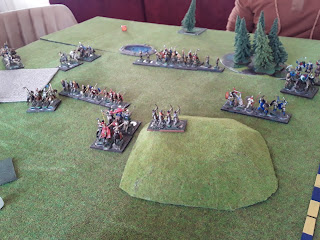 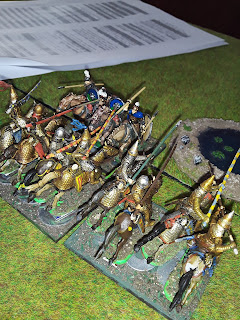 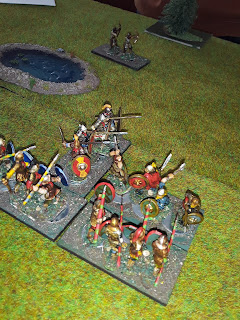 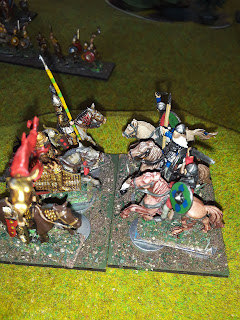 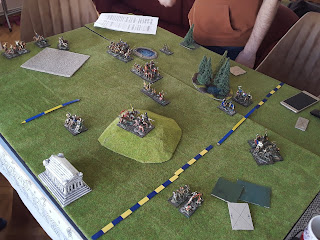 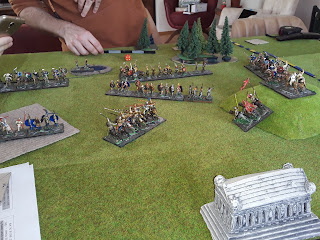 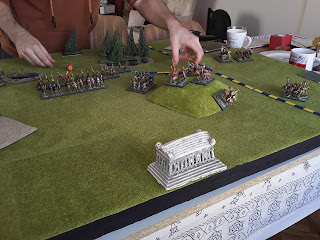 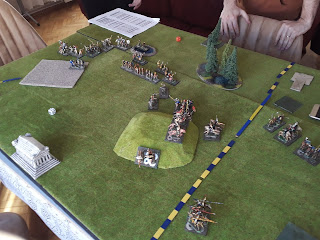 Posted by Konstantinos Travlos at 11:27 AM No comments:

Email ThisBlogThis!Share to TwitterShare to FacebookShare to Pinterest
Labels: DBA

As I am getting used to life with my tiny daughter (it is quite a lot of fun, though at times very fatiguing. ) I make sure to get some hobby action in. 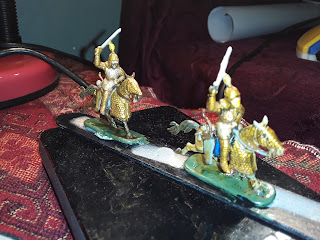 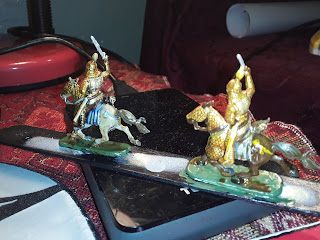 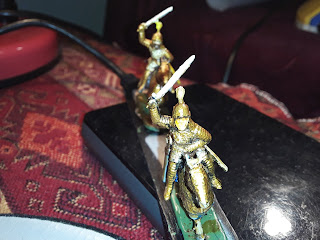 In the past, I used to avoid WIP photos, preferring to show off the finished product. But I think in the Zoe Era, showing off WIP can help me keep connected to the hobby.

On Thursday I had my first Zoe Era gaming session. I went to Doruk's with Nacho and we played the introductory scenario for GMT's Gallipoli 1915 board-wargame. The game looks interesting, but you still cannot persuade me that the traditional board-wargamer approach to terrain, fire etc is better than that of say miniature-wargames like BBB or Great War Spearhead. That said this is a rich game, though it will take us several training sessions to truly play it. 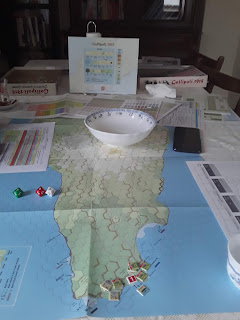 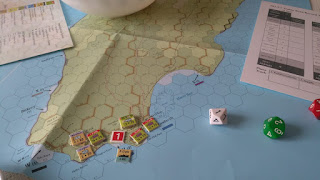 Novus Ordum Mundi: I am a father.

On 8th January 2019, my dear wife Ceren (pronounces Jeren) Mert-Travlos gave birth, via the method of Caesar, to our daughter Zoe Travlos. We are all well, and at home. I am beyond happy. We will see how my war-gaming goes over the next years, though I am excited to find a way to accommodate it in our new life. 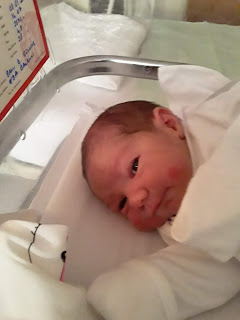 I have already made changes in my war-gaming goals, focusing on shorter games, like DBA and Saga, and probably will engage more in the hobby via slow painting and scenario making. I have had past dry spells, and I know that the key for me is to at least continue engaging periodically  with aspects of the hobby (paint, game, blog, read, write). So I am confident I can pull it off. Though got to be frank. Changing her is more exciting than anything I have done in my life until now!

Posted by Konstantinos Travlos at 6:01 AM 6 comments:

Happy New Year to All!

I wish my blog followers and friends a Happy New Year for 2020. With quality peace, joy, health and affluence for you all! And of course quality war-gaming with good friends!

My plans for 2020 are simple. Receive and enjoy my baby girl. We are in the last phase of the process and the doctor has said she will get her out if need be by the 7th., But we still hope for a natural birth!

War-gaming wise, 2019 was a good year, though not as good as 2018. I do not have the statistics but between October 20th and now I had four games, which is not too bad. I know gaming time will become a prenium with the coming of my daughter (blessed the time of arrival) but my hope is to still get in 6 games a year. It should be doable, and I intend to follow my new rule, which is I do not play a second game in the same theme/period before I have gamed once in every period/theme I have models or collections for. This means my next games should be either Fantasy, Ancient-Medieval, 18th Century, 19th Century, WW2, or Naval Age of Steel.

Collection wise I continue my big 1/72 Ancient-Medieval project, mostly aimed at SAGA, Aurelian and DBA.  You have not seen much about it, since I tend to only post on projects when I complete them, but it has beeng going steady, hobbled only by the extreme difficulty of getting 1/72 figures in Turkey.

Beyond that I have no plans for any new acquisitions. Me and Onur are talking about building armies for the Greek-Turkish War of 1919-1923 but this will have to wait me scenario work.

Scenario and game design wise , the year will see me continue working on Bloody Big Anatolian Battles, with my hope being to cover scenarios for the Greek Offensive of 1921. I am also working on traditional hex-and counter war-game focused on the conflict as well.

That is all. Happy New Year!


Posted by Konstantinos Travlos at 2:45 AM 2 comments:

(edited for more photos)This game is two weeks old. But I might as well write on it. Nacho and Doruk came over to my house for the last game day in what hopefully will not be a baby-free house come January. We played Kiss me Hardy. Nacho commanded a powerful Spanish squadron of two 1st rate and 1 3rd rate. While the British (me and Doruk) commanded two squadrons, each of two 3rd rates. Nacho crushed us gaining a satisfying Spanish victory (for him). Three British ships were captured, or crippled, and one had to run away. 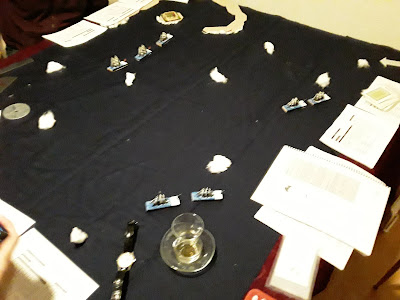 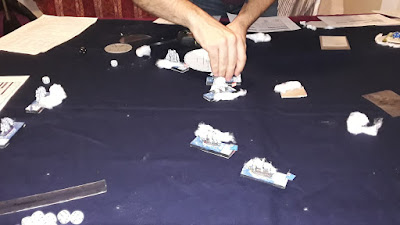 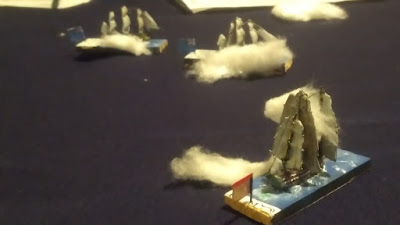 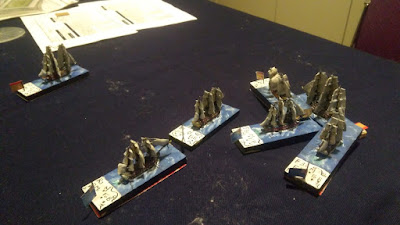 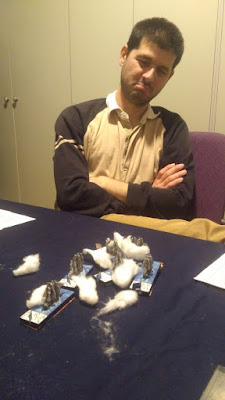 Email ThisBlogThis!Share to TwitterShare to FacebookShare to Pinterest
Labels: Age of Sail

Last Sunday we played a gmae of Tercios. Nacho provided the beautifully painted armies, while the Kararagh Club hosted us. The game was in honor of Mehmet Batuhan (author of Trial By Fire) who was visiting from Izmir. I and Onur took the role of the Holy Roman Empire, while Mehmet and Nacho led the Ottomans. It was straight forward battle scenario, with the side with more VPs from causing losses to the enemy winning.

We went for our usual denied flank tactic (which works in 99% of 28mm wargames rules due to the lack of reserves). Initially things went well for us, but the friction and some mistakes by me, saw our cavalry flank (commanded by me) collapse. In the end we were able to clinch a draw.

The game is rather abstract, but the feel of the battle felt like a 17th century battle, in the sense that fortuna could change. I also felt me morale sink when my cavalry flank broke, which is realistic, which led me to lose heart. Good thing Onur was a fortress of calm! The lack of Reserves in both sides was telling.

All in all a good game with beautiful miniatures (painted by Nacho who is also available for hire).

Here are pictures taken by the others. 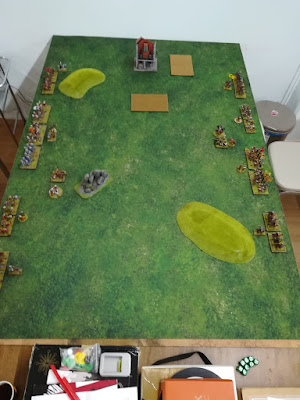 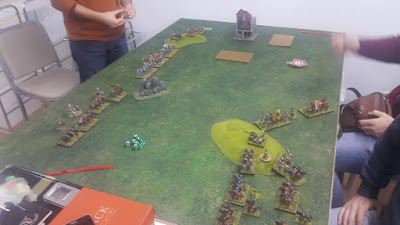 Read more »
Posted by Konstantinos Travlos at 3:00 AM 2 comments:

Email ThisBlogThis!Share to TwitterShare to FacebookShare to Pinterest
Labels: From Later Rome to Early 17th Century

The newest drat scenario for my Big Bloody Anatolian Battles Project is now out. Head to my Salvation and Catastrophe Blog for download links.
Posted by Konstantinos Travlos at 11:19 AM No comments: